The Japanese Yen’s current backstory is of course fundamental, with risk aversion stemming from increased US-China trade tensions supporting what is, after all, perhaps the quintessential anti-growth currency play.

The US Dollar has haven appeal too, of course, but the Japanese Yen is certainly beating it at present, with USD/JPY having wilted very sharply back to lows not seen since the start of February. So much for the fundamentals, how has the technical picture changed?

Well, the pair has now slipped back through the first two Fibonacci retracement levels of this year’s overall rise from the lows of early January to the peak of late April when trade began to take a toll. 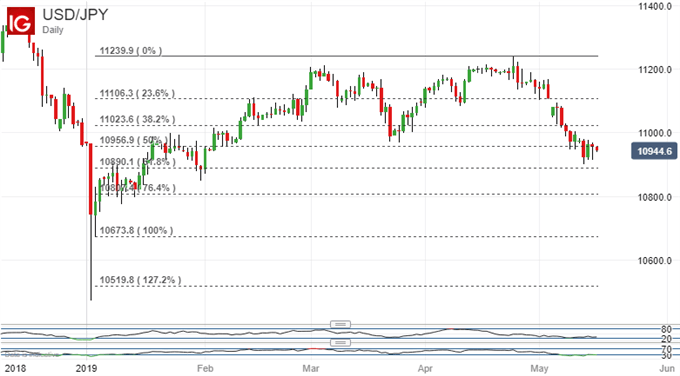 The third, 50% retracement at 109.57 has also given way, but perhaps not conclusively yet. It’s notable too, perhaps, that there has been some upward impetus on momentum charts such as the Relative Strength Index around current levels. The pair has quickly bounced from drastically oversold positions twice in the last couple of days.

None of this is to say that the Yen’s ascendency is over. It is likely to gain for as long as trade pinions market attention and there’s no sign yet as to when that story’s grip might loosen. All the same the Dollar does offer fundamental yield advantage over its Japanese rival and it may take some seriously bad news on the trade front to push the retracement process much lower in the short term. Keep a close eye on daily and weekly closes relative to that 50% pullback level.

Australian Dollar weakness against the Japanese unit should of course be no surprise in the current environment. The former is after all perhaps the most pro-growth of all major traded currencies.

However, while we do see this weakness, with AUD/JPY now well below the broad trading range which had dominated for much of this year, 2019’s lows are still unchallenged and that is perhaps surprising.

It may be that some of USD/JPY’s reluctance to try the year’s lows is being transmitted across the Yen complex and that, if USD/JPY heads lower, so will the Aussie. However momentum indicators suggest that the Australian Dollar is now far more oversold than its US big brother, and we may see some pause in AUD/JPY weakness at least until that works its way out.

The path of least resistance still looks like being lower, though, but for how long is likely to depend utterly on trade news flow.