The US Dollar underperformed against its major counterparts on Wednesday after a relatively dovish Fed rate decision. Heading into the announcement, the markets were pessimistic with Fed funds futures pricing in a 25% chance of a cut by the end of this year. This would entail dropping the 2 rate hikes policymakers’ projected for 2019 back in December.

That turned out to be the case, but in the medium-term the updated dot plot (a chart that shows each official’s forecast for rates in the future) still alluded to one hike in 2020. What seemed to carry more weight in the FOMC announcement, and sending local front-end government bond yields lower, was a more pessimistic downgrade in economic projections than expected.

Wall Street and the S&P 500 soared on the announcement. This is because a pause in the central bank’s tightening cycle bodes well for equities. What is more interesting is that just two hours after the Fed, the S&P 500 was back to square one as it trimmed all its gains on the FOMC. The reality that financial markets face is that such a dramatically dovish shift in arguably the most influential central bank is not without its consequences.

Elsewhere, the British Pound also weakened as markets met UK Prime Minister Theresa May’s request to extend the Brexit deadline by three months with skepticism. Meanwhile, the anti-risk Japanese Yen and Swiss Franc were some of the best-performing majors as markets seem quite cautious. European equities did close lower before Wall Street did the same.

As markets transitioned into Thursday’s Asia Pacific trading session, the New Zealand Dollar puzzlingly got a boost from lackluster local fourth quarter GDP data. While the year-on-year rate of growth slowed, markets seemed to focus more on the in-line 0.6% quarter-on-quarter outcome. This may have led investors to believe that perhaps the nation could remain resilient in the short-term as world output slows.

Ahead, the Australian Dollar looks to February’s jobs report. Lately, economic data from Australia has been tending to outperform relative to economists’ expectations. A rosy outcome may diminish RBA rate cut bets, which are more aggressive than those priced in for the Federal Reserve. That may send AUD/USD higher. But follow-through will depend on how Asia stocks interpret the Fed and Wall Street’s trading session. 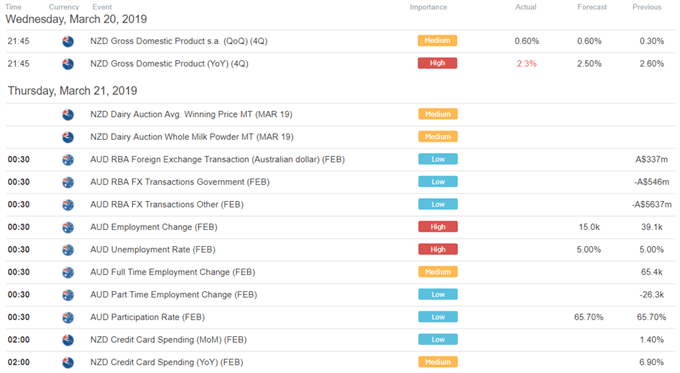