The US Dollar, having already exerted most of its energy on better-than-expected GDP data, held on to its gains following another round of commentary from Fed Chair Jerome Powell. He reiterated much of what was already said in his testimony before Congress, such as the central bank’s patient ‘wait-and-see’ approach for rates. Mr Powell said that the US economy is ‘in a good place’ with inflation running close to 2%.

What is becoming increasingly certain is that the central bank is on a path to halting the runoff in its balance sheet. We even saw equities rise on last week’s FOMC meeting minutes because this path is more clear than the natural uncertainty of interest rates. Keep in mind that the domestic economic outlook is overshadowed by some ‘cross-currents’ such as slowing global growth.

The US Dollar, after clocking in its best daily performance in over two weeks, finds itself sitting right on the descending resistance line from the middle of February. Meanwhile near-term support, a range between 95.82 and 96.04, was bolstered. As such, we may see a breakout soon that could pave the way for what is to come in the short-term. You may follow me on Twitter for the latest updates on the Greenback here at @ddubrovskyFX. 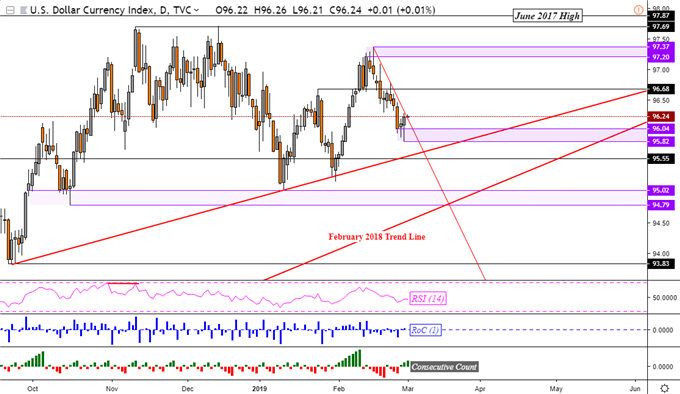