The US Dollar declined on Friday, but it still managed to cap a solid week that had a few bouts of risk aversion. Most of its weakness occurred after a mixed first quarter US GDP report. While growth surprised to the upside (3.2% versus 2.3% expected), that was undermined by weakness in personal consumption (1.2% versus 2.5% prior). The latter accounts for about 70% of overall GDP.

An increase in inventories, typically a volatile component, contributed to a decent chunk of growth. That said, US front-end government bond yields declined which signaled more Fed rate cut bets. Fed funds futures are now pricing in about a 66% chance of a cut by the end of this year, up from 61% Thursday. By the end of the day, the S&P 500 rose 0.47% as the pro-risk Australian and New Zealand Dollars climbed.

But it was not without smooth sailing. After the GDP report, US President Donald Trump took another jab at getting OPEC to increase oil output. This sent the commodity lower in its worst day in over four months and concluding the most disappointing week in two months. As a result, energy shares weakened and deprived the S&P 500 of its full potential for the day.

Looking at the daily chart, crude oil closed right on the rising support line from late December. Its recent drop occurred alongside negative RSI divergence which was hinting of a top to come. Confirming a close under the trend line opens the door to a new dominant downtrend. On the other hand, resuming the uptrend entails clearing resistance above 66.58. 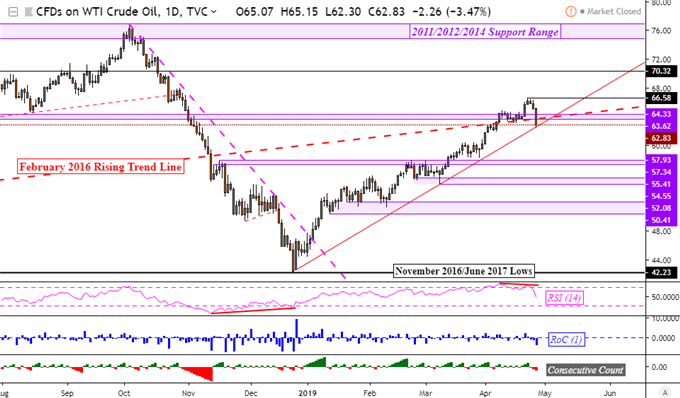 As we begin a loaded week with critical US economic event risk, Monday’s Asia Pacific session is notably lacking data. As such, this places the focus on risk trends. Japanese markets are offline for the Golden Week holiday which brings with it lower-than-usual levels of liquidity which may increase volatility on surprise announcements. If other regional bourses follow Wall Street higher, the anti-risk Yen may weaken.