US Dollar Benefits in Risk Aversion

The highly-liquid US Dollar aimed higher on Tuesday, benefiting from a bout of risk aversion that saw the S&P 500 and Dow Jones close 0.84% and 0.93% lower. This occurred despite better-than-expected local consumer confidence data, 134.1 versus 130.0 anticipated in May. While polling suggests that consumers are feeling great despite the uptick in US-China trade war fears, financial markets seem to think otherwise.

As an example, Tuesday’s US 2-year government bond auction saw an uptick in the bid/cover ratio from 2.51 to 2.75, reflecting greater demand for what is essentially a risk-free asset. Meanwhile, the yield returned at 2.13%, down from 2.36% prior on the same amount of debt auctioned ($40.0b). Looking at the chart below, the S&P 500 declined alongside bond yields as the US Dollar rose. 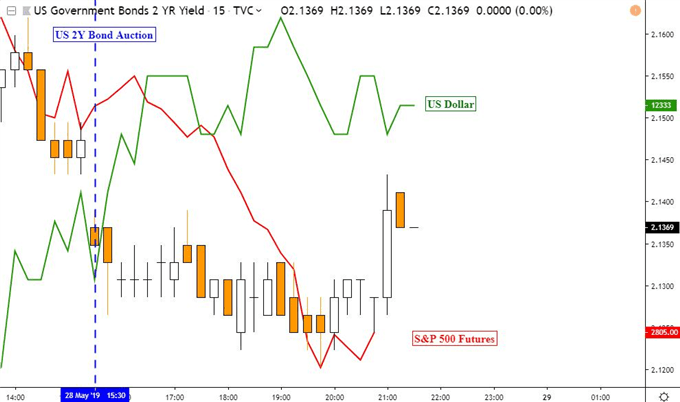 Simultaneously, the spread between US 10-year note and 3-month bill inverted deeper, surpassing lows seen back in March. While this is typically seen as a recessionary signal, it is important to note that there should be persistency in the inversion for it to be meaningful. Keep in mind that the Fed’s effort to unwind QE in the aftermath of the 2008 financial crisis is pushing yields at the front-end of the curve higher and contributing to the inversoin. 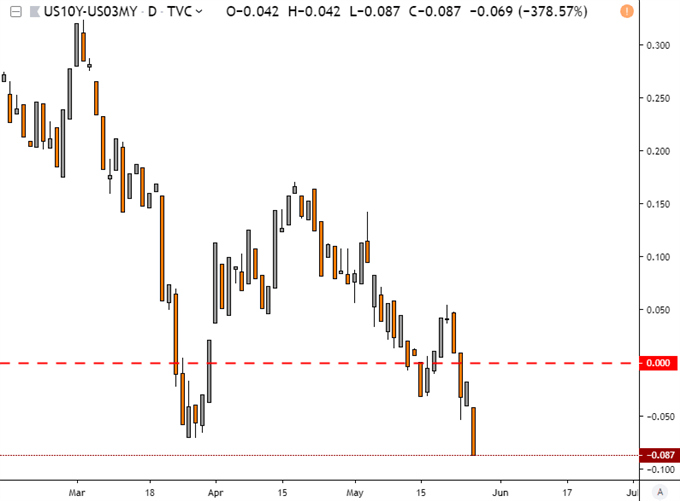 The anti-risk Japanese Yen outperformed on Tuesday, and if Asia Pacific equities echo declines seen on Wall Street, it could advance further. Curiously, the similarly-behaving Swiss Franc suffered, perhaps due to concerns from the aftermath of the European Parliamentary Elections. Meanwhile, the New Zealand Dollar looks to commentary from RBNZ Governor Adrian Orr as he speaks to Parliament.