The US Dollar is making a broad upward push against its ASEAN counterparts, with a well-defined descending resistance line in USD/SGD from December now broken. But, the greenback still has one more notable barrier to break against the Singapore Dollar. That would be a falling channel of resistance going back to November. Clearing it would open the door to reversing the dominant downtrend. At that point, the next area of interest seems to be around 1.3615. A turn lower places 1.3489 as near-term support.

Follow me on Twitter here @ddubrovskyFX for updates in major moves in ASEAN currencies as well as fundamental developments in the interim. 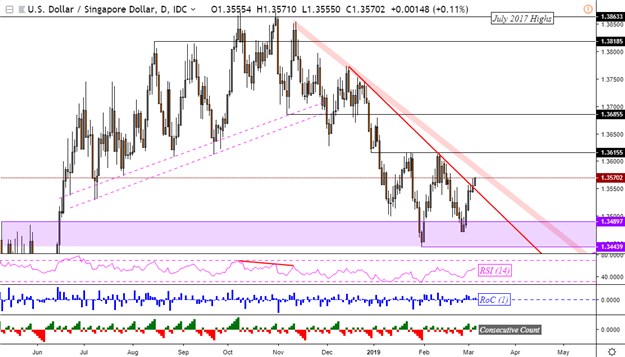 Last week, I noted the emergence of a falling wedge bullish reversal pattern in USD/MYR. Since then, the Malaysian Ringgit has lost ground against the US Dollar as prices broke above the candlestick formation. With confirmation, via an additional close to the upside, USD/MYR might also be getting ready to overturn its dominant downtrend from the end of last year. That would place immediate resistance at 4.0925. Meanwhile, support seems to be around 4.065. 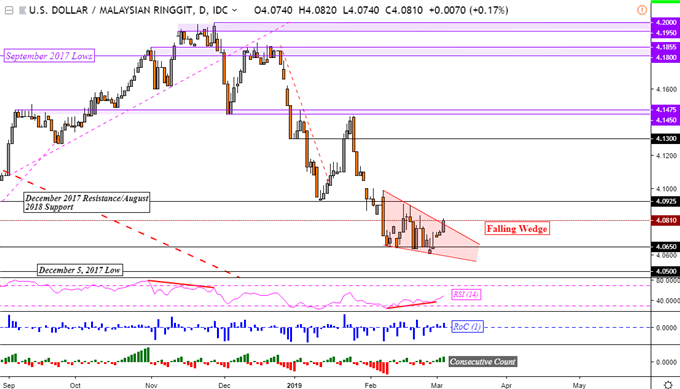 USD/IDR also seems to be slowly confirming the emergence of a bullish technical candlestick pattern, an inverse head and shoulders. However, the pair seems to be struggling to break past near-term resistance at 14155. This may be as a result of intervention from the Bank of Indonesia, which still sees its currency as undervalued. Pushing above 14155, while potentially a strong bullish signal, could be met with efforts from the central bank to keep it tamed. Support seems to be at 14010. 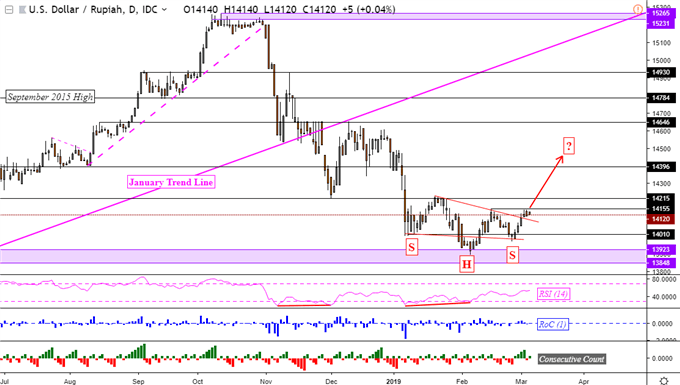 Fundamentally, the Philippine Peso has been losing ground after President Rodrigo Duterte unexpectedly appointed a potentially dovish Benjamin Diokno as the new governor of the central bank. USD/PHP rose 0.92% in its most aggressive climb over the course of 24 hours since May 2018. The pair was unable to breach a descending range of resistance from January and has arguably more barriers left to overturn its dominant downtrend (see chart below). Near-term support is around 52.12 followed by the early March lows. 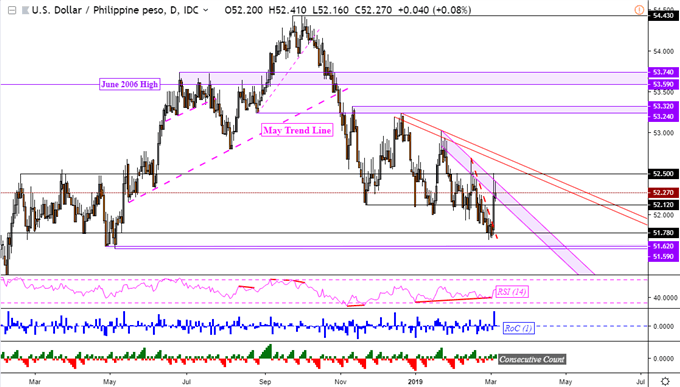