GBP: The Pound has been slightly firmer this morning, however, the currency failed to make a firm breach above 1.2750. While the Tory leadership campaigns get underway with Boris Johnson the latest MP to launch his campaign, focus is beginning to shift towards a potential motion that could prevent a no-deal Brexit taking place.

The cross-party motion would stop the future PM from shutting down parliament in order to go ahead with a no-deal Brexit against MPs wishes. Consequently, this continues to show that the deadlock facing the next PM will remain a difficult one to resolve. If the motion were to be passed, this would likely see a dialling back of no-deal Brexit concerns, thus providing marginal support for the Pound, given how short speculators are of GBP (Of note, only three Tory rebels are needed to get the motion passed). However, while concerns of a no-deal Brexit may well ease, the political chaos remains, which in turn could see initial gains somewhat limited.

USD: The US Dollar dropped following the release of the latest CPI report. The headline CPI rate fell to 1.8% below expectations of 1.9%, raising odds of a rate cut for July, which in turn could see the FOMC begin to signal an easing bias at next week’s meeting. However, the fall in the US Dollar has once again been curbed by the 200DMA at 96.54.

Crude Oil: Overnight, the latest API Crude Oil Inventory Report showed a surprise build of 4.9mln barrels, against an expected drawdown of 500k barrels. In turn, this has seen both Brent and WTI crude futures on the backfoot throughout the European session. Eyes now turn towards the DoE crude report scheduled for 1530BST for confirmation. Elsewhere, the expected boom in shale production continues to dampen sentiment in the energy complex following the EIA’s forecast, in which see US crude output growing faster than world oil demand growth this year.

Iron Ore: Dalian iron ore prices have continued to extend on its recent gains with the steel-making ingredient benefiting from recent reports that China will ease restrictions on local government’s borrowing for key infrastructure projects. 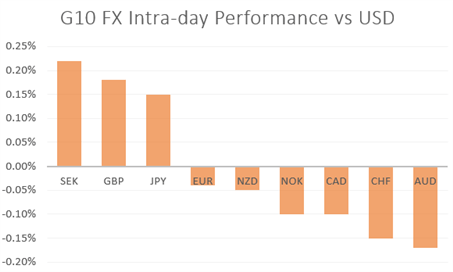