The US Dollar outperformed against its major counterparts on Thursday, building on gains from yesterday’s less dovish-than-expected Fed monetary policy announcement. The Greenback’s appreciation picked up pace during the European trading session as S&P 500 futures turned lower as anticipated. Weakness prolonged with an uninspiring earnings report from Caterpillar Inc.

Sentiment-linked crude oil prices also followed suit after a delayed reaction to the Fed, clearing a major rising trend line that has increased the odds of a bearish reversal. Just as the commodity embarked on its journey lower, OPEC Secretary General Mohammad Barkindo noted that the cartel is working to avoid an energy supply crisis given the situation in Venezuela. 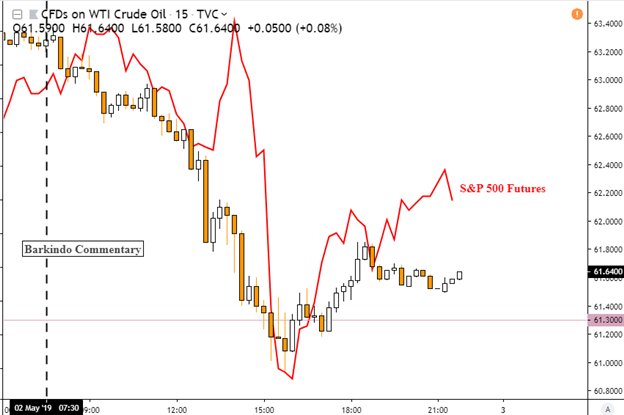 The British Pound showed a muted reaction to the Bank of England monetary policy announcement even though Governor Mark Carney talked up interest rate hikes. The uncertainty that looms over the United Kingdom, Brexit, was cited as a concern which inherently saps the appeal of Sterling given geopolitical risks.

On a daily chart, DXY appears to be making an attempt to retest late-April highs after bouncing on former resistance-turned-support at 97.52. The US Dollar thus sits right under June 2017 highs and under the psychological barrier between 98.15 and 98.33. On the whole, the US Dollar has been slowly trending higher this year, guided by rising support from late September 2018. 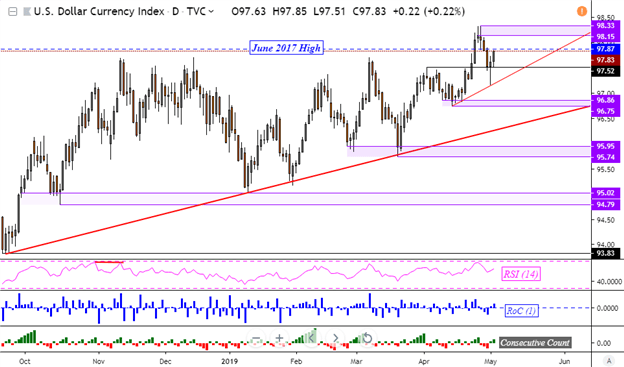 Aside from Australian building approvals, Friday’s Asia Pacific economic docket is relatively light. On top of this, markets are eagerly awaiting the US jobs report at the end of this week. With S&P 500 futures trading little changed, there may be a brief period of consolidation before critical data crosses the wires.