– The DXY Index is gaining ground for the first time in five days as all attention remains on the news wire.

– Softness in Gold prices and the Japanese Yen may be tied to the dual rebound in the US Dollar and in US Treasury yields.

The US Dollar (via the DXY Index) is gaining ground for the first time in five days as uncertainty surrounding the US-China trade war negotiations has increased again as US officials continue to suggest that the two sides remain far apart on a deal. Elsewhere, amid a relatively quiet economic calendar, traders have been patiently waiting for clear direction the state of the Brexit negotiations as the March 29 deadline quickly approaches. With US Treasury yields inching back higher, both Gold price and the Japanese Yen have slipped halfway through the trading day.

Another Brexit Vote in Parliament Today

After votes on Tuesday and Wednesday, the UK parliament is back in session today for a third (and hopefully final) vote this week. After rejecting UK PM Theresa May’s deal on Tuesday then rejecting then a no deal, “hard Brexit” on Wednesday, all signs point to UK parliament voting in favor of an extension to the negotiating window, currently set to expire on March 29.

But there are several key facts that warrant a high degree of caution. First, if an extension in the negotiating process is indeed sought after, the EU will need provide its approval as well (not guaranteed). Second, Wednesday’s vote against a no deal, “hard Brexit” was non-binding. Therefore, it’s still possible that we will soon find ourselves in a situation where, despite not wanting to, the UK is careening towards a no deal, “hard Brexit” without any recourse – unless, of course, UK PM May steps down and another General Election is held (perhaps paving the way to a Second Referendum).

As it goes with GBPUSD, nothing has changed in the past 24-hours. The nine-month range between 1.2660 and 1.3365 remains in place, with around 92% of price action since last June taking place within said range. Until we see significant movement beyond these parameters, it may be best to let GBPUSD simmer on the Brexit burner.

No Trump-Xi Meeting for (at least) a Few More Weeks

In what almost is now a daily retelling, we find ourselves taking another spin around the US-China trade war news cycle. As we’ve previously noted, the cycle goes: (1) Trump administration is tough on China; (2) financial markets sell off on trade war concerns; (3) Trump administration hints at US-China trade deal; (4) financial markets rally on trade deal hopes; (5) No deal materializes.

Where does this leave us now? Just yesterday I noted that “it would appear that we’re now experiencing phase 4 – the rally after hope for a deal. Don’t be surprised if the next few days produce some news that a trade deal is unlikely, before hope springs anew next week (so it goes).” Indeed, we now have the news that a deal is unlikely in the near-term, and that US President Donald Trump and Chinese President Xi Jingping won’t meet until April at the earliest. 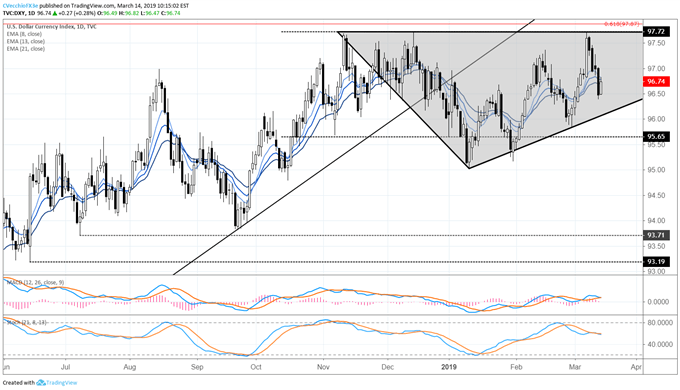 Price action in the broader DXY Index is reflective of the lack of progress made in any key areas like the US-China trade war; we’ve been moving sideways in both negotiations and in price action. As such, with little net movement thus far this week, the near-term outlook remains unchanged. It’s possible that price action since mid-November has been coalescing into an ascending triangle against the 97.72 high set in November, December, and retested last week. While this may give a longer-term bullish bias in context of the consolidation developing after an uptrend, right now, the DXY Index’s forecast is necessarily neutral. Both daily MACD and Slow Stochastics starting to point lower (albeit in bullish territory). Concurrently, with price enmeshed in the daily 8-, 13-, and 21-EMA envelope, patience is required before the next directional move becomes clear.