– The US-China trade talks are due to restart next week, with US Treasury Secretary Steve Mnuchin and US Trade Representative Robert Lighthizer traveling to Beijing.

– After the EU and UK agreed on new parameters for the timing of Brexit, questions remains over whether or not UK PM Theresa May will be able to get her deal passed in UK parliament.

The US Dollar (via the DXY Index) is gaining ground for the second day in a row in the wake of the March Fed meeting. The dovish turn by policymakers initially knocked the US Dollar, but with rates markets having already priced-in a less hawkish rate path ahead of Wednesday’s festivities, there was not that significant of a shift in expectations thereafter.

Amid a quieter economic calendar to close out the week, attention shifts away from the growing flock of dovish central banks (both the Fed and the ECB have made a dovish turn this month) and back to the two major thematic influences of the past year years: Brexit and the US-China trade war.

Next Round of US-China Trade Talks Coming

After a few weeks of reprieve, Sino-American negotiations are set to resume as officials on both sides of the Pacific Ocean seek to avoid any more collateral damage to either of the world’s two largest economies. US President Donald Trump has offered more optimism in recent days, but has been quick to note that tariffs could remain in place even if a deal is reached – keeping them for a “substantial period of time” in order to enforce Chinese compliance to the agreement.

Where does this leave us in the trade war news cycle? As we’ve previously noted, the cycle goes: (1) Trump administration is tough on China; (2) financial markets sell off on trade war concerns; (3) Trump administration hints at US-China trade deal; (4) financial markets rally on trade deal hopes; (5) No deal materializes. It would seem that we’re simmering in phase 3 right now.

Brexit Latest – How Long Will PM May Last?

UK Prime Minister Theresa May has returned back to London with an agreement in hand from European Commission President Donald Tusk. The deal has four main parts: (1) the EU agrees to the Article 50 extension until May 22 if the Withdrawal Agreement is approved next week; (2) if not agreed next week, then the extension will only go until April 12; (3) EU approves the ‘Strasbourg Agreement’; and (4) the EU will continue no-deal preparations.

If this seems like an inescapable maze…you’re certainly right to feel that way. Can UK PM May get her deal passed through UK parliament? She has already failed twice, and we know that Speaker Bercow has said that she can’t bring the Withdrawal Agreement to the floor without substantial changes. This leaves the prime minister with few options.

As we said last Friday, “a request for an extension to the negotiating window seems likely. It’s possible, given May’s failure to whip together a coalition to support her plan, that she abdicates her role as prime minister and calls for another General Election.” If next week’s efforts to get the EU-UK Withdrawal Agreement passed through UK parliament fail, don’t be shocked if the next thing you read about is Theresa May’s resignation.

What does this mean for the British Pound? With volatility levels starting to rise back to multi-year highs, the Brexit rollercoaster is far, far from over. 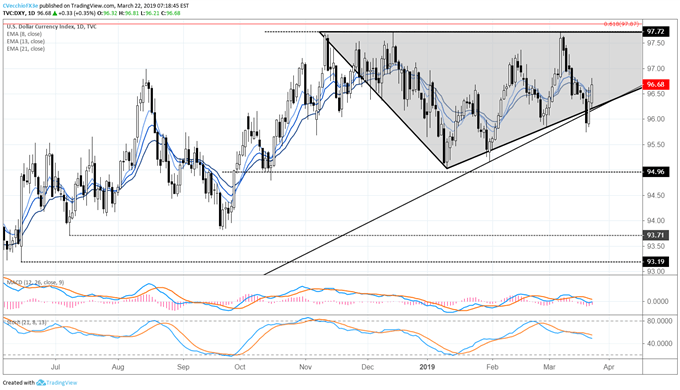 For the broader DXY Index, the weekly candle remains of particular importance as price grapples with not only breaking the triangle it’s consolidated in since November, but also losing the uptrend from the 2018 low. The second consecutive day of gains is putting the DXY Index on track to retake its consolidative triangle, suggesting that weakness seen earlier was a false breakdown. As such, with the range persisting, US Dollar bears may go back into hibernation for the time being.