The US Dollar outperformed against its major counterparts on Thursday amidst a general pickup in sentiment despite the looming threat of a pickup in US-China trade wars. The uptick in market optimism, which resulted in the S&P 500 and Dow Jones closing 0.89% and 0.84% higher respectively, occurred against the backdrop of rosy earnings reports from Walmart and Cisco during the first half of the day.

US front-end government bond yields rallied, and expectations of a rate cut from the Federal Reserve weakened slightly. Rosy markets also aided sentiment-linked crude oil prices as the Canadian Dollar extended gains. Interestingly, the pro-risk Australian and New Zealand Dollars were unable to capitalize on the improvement in sentiment, likely owing to a jubilant Greenback that yields a higher rate of return.

Taking a look at the EUR/USD daily chart, prices have just closed under a former range of support under 1.1176. Not only was this the worst day for the Euro in over 3 weeks, it also followed a break under the near-term rising channel from the end of April. This has once again exposed June 2017 lows, which held on April 25, offering a temporary rebound for the pair. 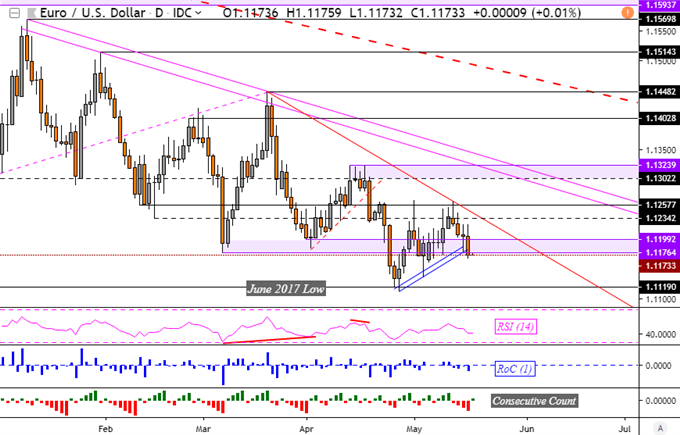 It seems that we may get another shot at closing under the June 2017 lows. On the next chart below, market positioning is offering a bearish-contrarian EUR/USD trading bias. If you would like to learn more about using this in your market analysis, in addition to fundamental and technical ones, tune in for my webinars each week on Wednesdays at 00:00 GMT. 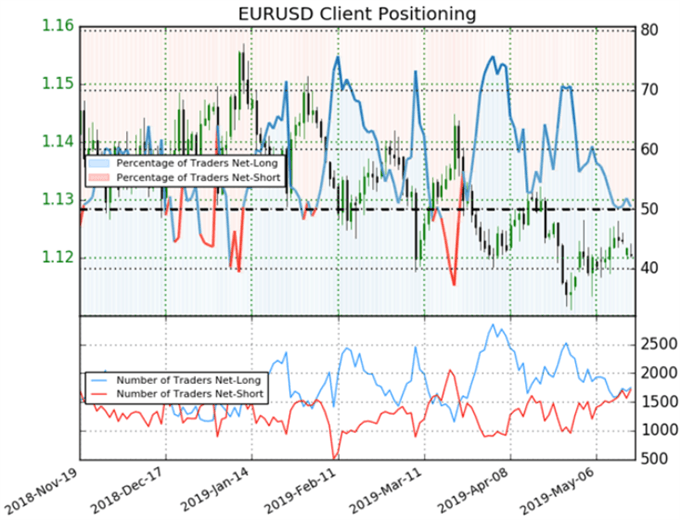 Friday’s Asia Pacific trading session is relatively quiet, when looking at the economic calendar docket, compared to what we have seen this week so far. With that in mind, this places the focus for markets on risk trends and sentiment.

Local indexes may echo gains from the prior Wall Street trading session, but that was not quite the case when markets were presented with a similar scenario yesterday. Updates on the trade front are a wildcard, especially with rising geopolitical tensions between Chinese telecommunication companies and the US.