The US Dollar up trend is mature and appears to be nearing a large pivot towards weaker pricing. This is helping silver prices in its search for a meaningful bottom.

The video above is a recording of a US Opening Bell webinar from June 3, 2019. We focused on the Elliott wave patterns for key markets such as DXY, silver, gold, EURUSD, GBPUSD, NZDUSD, USDJPY and S&P 500.

The US Dollar Index is showing more symptoms of a longer lasting turn towards weakness. As we write, there are several options we are following that are higher probability but they all have one thing in common. Any strength is likely to be followed with a deep cut of weakness. If any strength emerges, we are anticipating DXY to hold below 104 and possibly below 100.

A key level we are watching right now is 96.48. If 96.48 breaks, then the probabilities shift towards a heavier drop and DXY may continue down towards 92 – 94. From there, various wave patterns begin to diverge.

On the one hand, we can count a completed Elliott wave ending diagonal pattern at the May 23 high (noted in grey on the daily price chart). The ending diagonal would count as the (C) wave and final wave of the larger rebound that began February 2018. That would imply the large turn towards US Dollar weakness is already underway and likely to last several months and possibly more than one year and drive DXY down below the mid-80’s.

A less bearish scenario suggests the (B) wave that began August 2018 is still in progress and is dipping in its final waves. The (B) wave scenario may only dip to 92-94, find support, then rally to its terminus near 100.

Bottom line, a strong trend towards US Dollar weakness may imply strong trends in several markets priced in dollars like silver or gold.

How to trade US Dollar Index 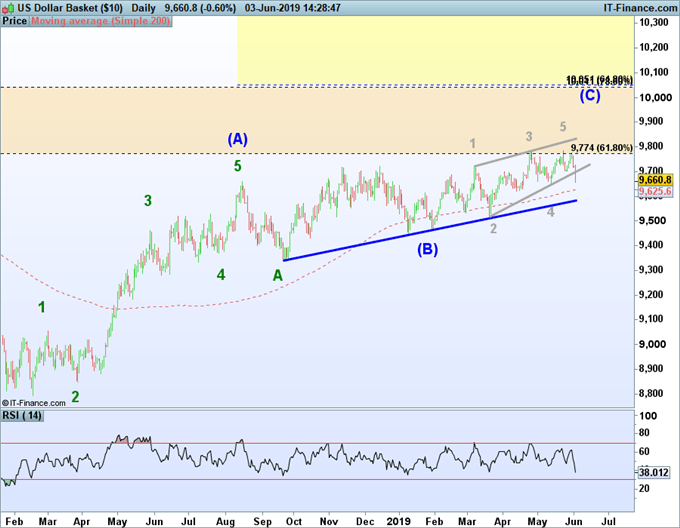 Our last silver price update was April 29, when we stated “little progress has been made since April 15 and the waves do not appear motive. Therefore, we will not be surprised if silver makes a deeper cut and one more jab towards lower prices.”

Lower prices were cut indeed. Remember, back on March 25, silver prices were trading near 15.53 and we discussed the potential for another wave lower into the 14.40-14.80 price zone which may lead to a strong bullish reversal. Now that silver prices have arrived, we have the minimum waves in place to count the three-month long correction as over.

Our last silver price update from May 20 discussed several wave relationships appearing near 14.40. The larger corrective pattern is a bearish Elliott wave zigzag that began from February 20 (left side of chart).

Wave ‘c’ of this zigzag pattern is an ending diagonal. There are a lot of wave relationships showing up near 14.40 (which was the bottom edge of our reversal zone identified March 25).

As a result, there is a lot of evidence in a relatively small zone suggesting a bullish reversal and pivot.

Earlier today, silver prices popped up outside of the green channel signaling a temporary and possibly medium-term low is in place. If the ending diagonal is finished, then a swift rally to 15.64 is a primary target. From there, additional rallies may reach 16.60 and 18.00. The November 2018 low of 13.89 should contain any further drops under this Elliott wave analysis. If 13.89 is broken, then some other wave pattern is at play. 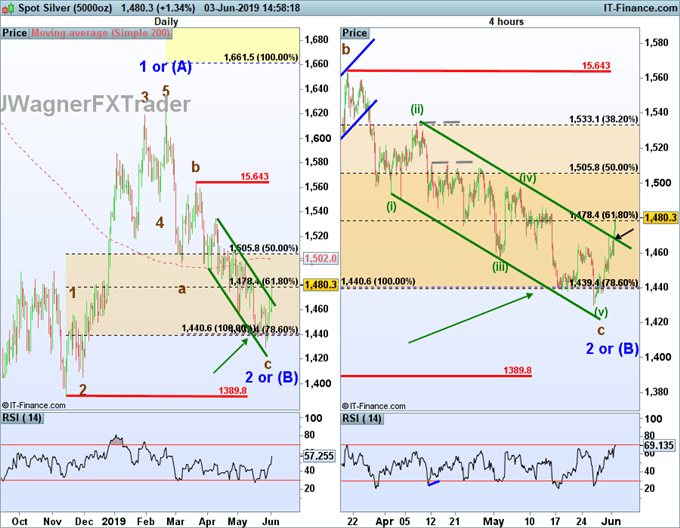