– The latest headlines suggest that a ‘soft Brexit’ is still possible; the UK parliament will be voting again tonight.

– The US Dollar is proving stable at the start of a big week: Chinese trade representatives are in Washington, D.C. for talks and the March US Nonfarm Payrolls report is due on Friday.

The US Dollar (via the DXY Index) had a strong run to end March and Q1’19, posting gains in six of the past seven days. The start of April and Q2’19 has started on a similar tone, with the DXY Index trading to the topside once more, even if price action has thus far resolved itself into an inside day bar. Such a development at the start of a key week – the RBA meeting, the March US Nonfarm Payrolls report, among others – isn’t necessarily a surprise as market participants await more information before staking out more aggressive positions.

After US Treasury Secretary Steve Mnuchin and US Trade Representative Robert Lighthizer traveled to Beijing last week, US President Donald Trump said that “the trade deal is going very well,” though he did caution that anything less than a “great deal” wouldn’t be accepted. Now, Chinese Vice Premier Liu He, China’s top negotiator on the trade deal, is en route to Washington, D.C.

UK Prime Minister Theresa May’s EU-UK Withdrawal Agreement was voted down for a third time last week, shifting the Brexit deadline to a tentative date of April 12. But after a series of indicative votes held by UK parliament last week, it’s evident that there is consensus for a “soft Brexit” option – just no agreement for what kind.

That a “customs union” received the most significant support, and that, overall, 312 members of UK parliament voted for some form of a “soft Brexit,” it would appear that the votes may be there in order to avoid the no deal, “hard Brexit” outcome. While the EU has been playing hardball, it seems that the EU’s strategy is to ensure that they will not be the entity to push the UK out the door; the UK will Brexit on its own timeline, even if that requires more extensions. 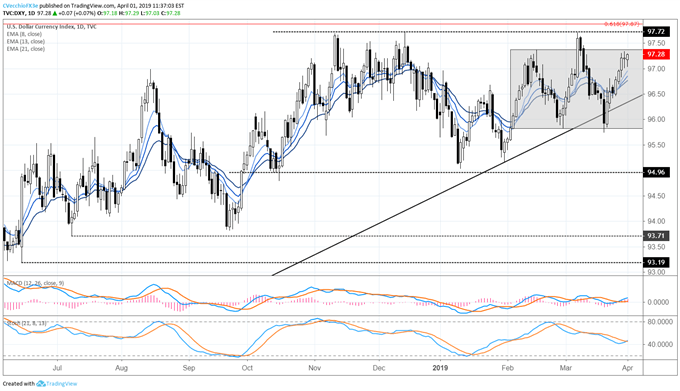 For the broader DXY Index, price has been trading between 95.85 and 97.35 every day since February 4. This tighter range has formed within the confines of the sideways consolidation dating back to October, between 94.96 and 97.72. Bullish momentum is building with the near-term consolidation, with price above its daily 8-, 13-, and 21-EMA envelope again as both the daily MACD and Slow Stochastics turn higher above their respective signal/median lines. Traders should be on alert for potential breakout opportunities over the coming sessions.