The US Dollar (via the DXY Index) gapped to open higher at the start of the week but closed Monday essentially unchanged from its Friday close, highlighting the state of patience pervading global markets ahead of key events this week. With the latest Brexit news suggesting that UK PM Theresa May won’t be able to see her Withdrawal Agreement go up for a third vote, traders are proving cautious as the March 29 deadline approaches.

Meanwhile, the US-China trade war appears to be ready to continue for a few more weeks, even if the period of détente persists with the 25% tariffs on $200 billion of imported Chinese goods on hold for the time being.

But with reports from the South China Morning Post over the weekend suggesting that the summit between US President Donald Trump and Chinese President Xi Jingping won’t be held until at least June, there exists the distinct possibility that market sentiment sours over the coming sessions.

A summit between the two leaders is (apparently) a necessary precursor to any deal being signed, so traders should keep an eye out for any concrete evidence that it has indeed been pushed back from the assumed late-April date.

Fed Meeting on Wednesday Likely to Keep Markets in Check

The Federal Reserve’s March policy meeting is very unlikely to bring any change in the rate forecast, even if the Summary of Economic Projections produces lower growth and inflation forecasts. But it seems unlikely that the FOMC would want to write off the odds of a rate hike in 2019 altogether, given that the unemployment rate is near 50-year lows and wage growth is at its highest level in a decade.

Accordingly, Fed Chair Jerome Powell has a balancing act on Wednesday: continue to talk in enough dovish tones to keep equity markets supported while not closing off the possibility of one more rate hike before the cycle is truly compete. As such, if the next few sessions leading into the Fed meeting on Wednesday are quieter (beyond isolated pockets of event risk or news flow), don’t be surprised. 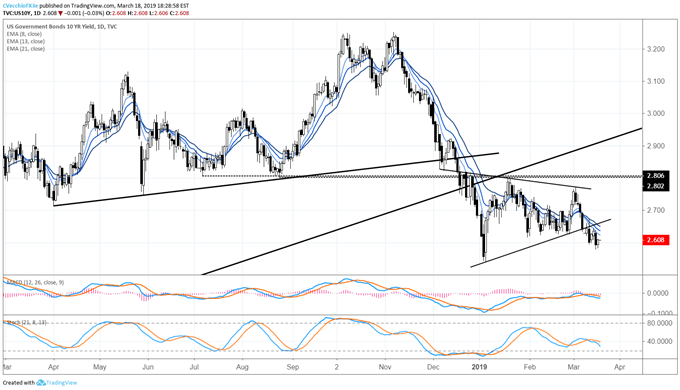 Following up with our note from Friday, the US Treasury 10-year yield remains on the outside of its three-month symmetrical triangle. It thus still holds that because the earlier attempt in March to break through triangle resistance failed, the 2.802/2.806% area remains as key near-term resistance. 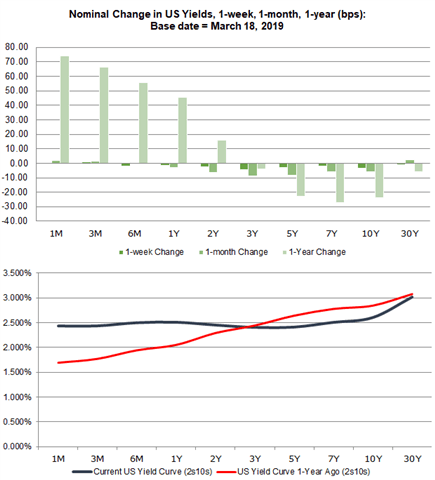 It remains the case that the US Treasury yield curve has flattened over the past year, and now there are several parts of the curve that are inverted, from the 1m2s, to the 3m5s, to the 6m3s and to the 1s7s. (Note: several of these aren’t quoted conventionally; they’re merely listed to point out how the yield curve, from many points of view, is starting to invert).

And while the 2s10s spread hasn’t inverted yet, it’s the 3m5s inversion that matters most. More flattening could be ahead if the Fed keeps a rate hike on the table in near-term while downgrading its growth and inflation forecasts. 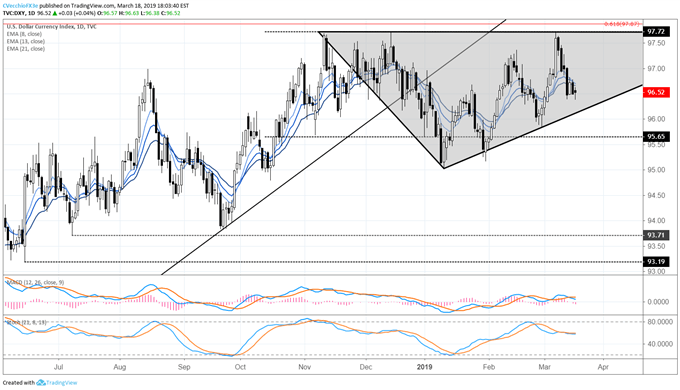 Ahead of the Fed meeting this week, the DXY Index’s forecast is still neutral. With US Treasury yields holding ground at the start of the week, the DXY Index has changed little in recent days. Price remains within an ascending triangle in place since November. It still holds that, with US Treasury yields having turned lower, the US Dollar is seeing its carry trade appeal deteriorate.

Both daily MACD and Slow Stochastics are trending lower out in bullish territory. Likewise, price is now below the daily 8-, 13-, and 21-EMA envelope, but the moving averages are not in bearish sequential order yet – another sign that a near-term neutral view remains valid.