After an exciting start to June, the second week of the month has been a lot less exciting. Case and point: the US Dollar (via the DXY Index) traded in a 1.04% range during the first three trading days of last week. Over the same period this week so far, the DXY Index has only traded in a 0.37% range. Volatility has calmed down, and in turn, price action across asset classes – US equities, US Treasuries, commodities, FX, etc. – has produced little meaningful movement over the past few days.

This trading environment may simply be a function of the calendar, however. Here’s why.

After a speech last Tuesday in which Fed Chair Jerome Powellsaid that policymakers are now “closely monitoring” the impact of trade developments and that the Fed will “act as appropriate” to help sustain the expansion, market participants aggressively discounted dovish policy action by the FOMC by the end of this year. 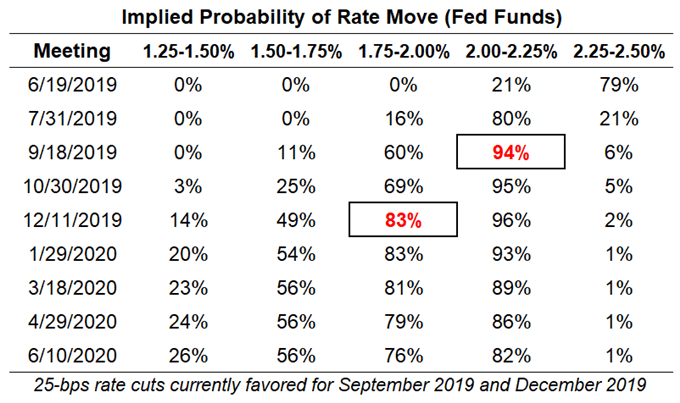 While these are only modest changes in pricing, it stands to reason that if rising Fed rate cut odds were driving the US Dollar lower last week, the fact that they haven’t risen any further is a relief for the beleaguered greenback.

It stands to reason that Fed Chair Powell was the motivating factor last week for rates market to kick into high gear and drag forward expectations for two rate cuts in 2019. But just because we haven’t seen a continuation of these efforts doesn’t mean that the prospect for fresh stimulus has dissipated. As mentioned earlier, the trading environment – which has been driven by Fed rate cut odds – may be a function of the calendar.

Now that we’re officially in the ‘blackout’ quiet period ahead of the June Fed meeting, neither Fed Chair Powell nor any Fed policymakers can issue commentary this week. Markets are currently deprived of the single most motivating factor for price action thus far in June.

As discussed in the weekly US Dollar forecast, it’s important to stage recent Fed commentary in the proper light: it’s been rather dovish, per shifting Fed funds futures, producing a weaker US Dollar, lower US yields, and a rally in US equities. Without the catalyst of dovish Fed officials, these recent market moves may simply be taking a breather ahead of the June Fed meeting – traders shouldn’t look too deep into the fact that we haven’t seen continuation from last week’s efforts. 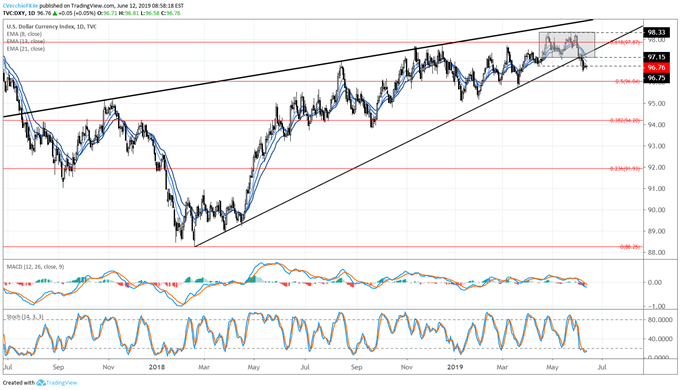 In our US Dollar price forecast last week, we noted “longer-term major topping potential.” With the DXY Index breaking five-week range support near 97.15, as well the rising trendline from the February 2018, March 2018, and March 2019 lows, it appears that the early stages of a major top for the US Dollar are unfolding.

It still holds then that we’re still in “the start of a double top pattern pointing towards 95.97/96.00 in the near-term, but longer-term major topping potential in the form of a bearish rising wedge – which would ultimately call for the DXY Index to decline back towards its 2018 lows near 88.25 over the next 16-months.” 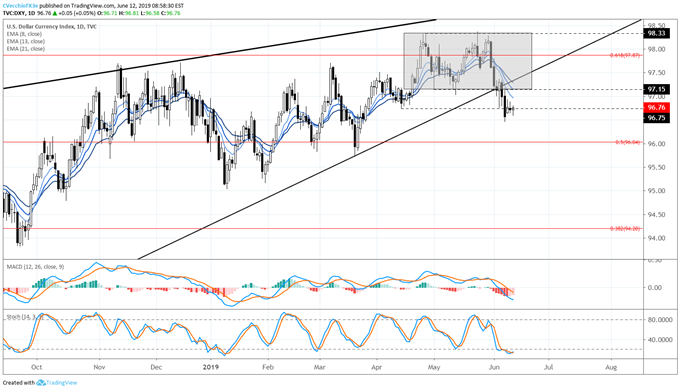 In the near-term, traders may want to be patient with the DXY Index: losses may have extended too far, too fast (similar to how gold prices rallied too quickly to the upside, signaling exhaustion). Now that prices have cracked the April swing lows near 96.75, traders may wait for the daily 8-, 13-, and 21-EMA envelope to eliminate the gap with the daily closing price in order for the oversold conditions to be worked off, as trading is both a function of price and time.

Momentum is very negative at the moment, with both daily MACD and Slow Stochastics trending lower in bearish territory, with the latter holding in oversold condition. The DXY Index has closed below the daily 8-EMA every session since May 31, and until it does so, there is little reason to have anything other than a bearish bias looking to sell rallies given the starkly negative momentum picture.