The Malaysian Ringgit may be on the verge of extending declines against the US Dollar as USD/MYR’s dominant downtrend looks increasingly vulnerable. I have been closely following the break above the Falling Wedge, which is typically a bullish pattern, over the past few weeks. Now, critical resistance is being tested at 4.095 which if broken, may open the door to testing 4.107. Meanwhile, a near-term rising support line from late March seems to be guiding the pair higher. 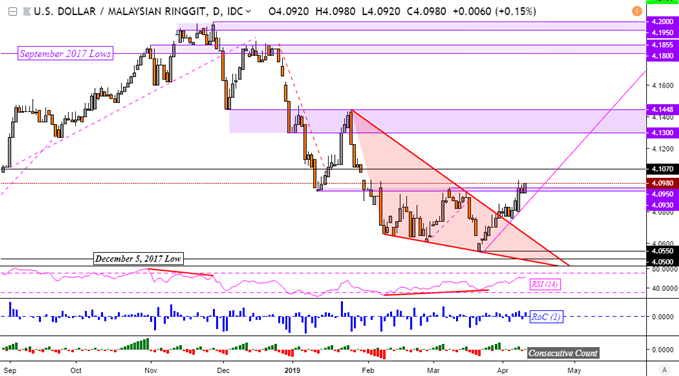 After much consolidation between converging trend line, USD/IDR seems to be a step closer towards picking its direction, and it may be lower. The Indonesian Rupiah took out rising support from February, opening the door to testing 14089. A close under this psychological area exposes 14010 before the current 2019 lows. On the flipside, keep a close eye on the falling trend line from December which may stem a turn higher. If the pair does clear it, USD/IDR may then find itself testing resistance at 14340. 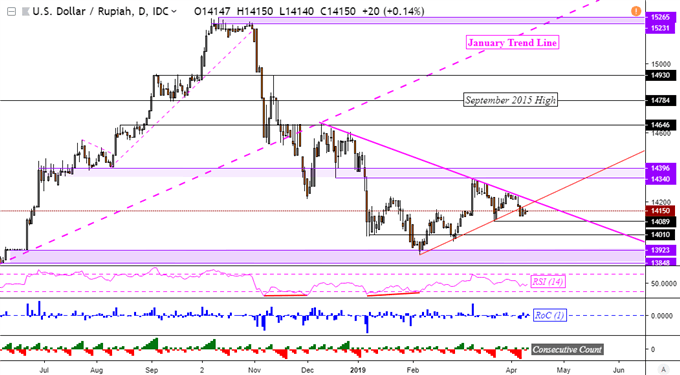 Like the Rupiah, the Philippine Peso also seems to be on the verge of appreciating against the US Dollar next. USD/PHP cleared support at 51.12, opening the door to testing 51.69 which would prolong the downtrend that followed the break under rising support from March. Otherwise, a turn higher exposes a falling resistance line from early March which is closely aligned with a psychological barrier around 52.55. If these are broken, 52.87 may be the next target. 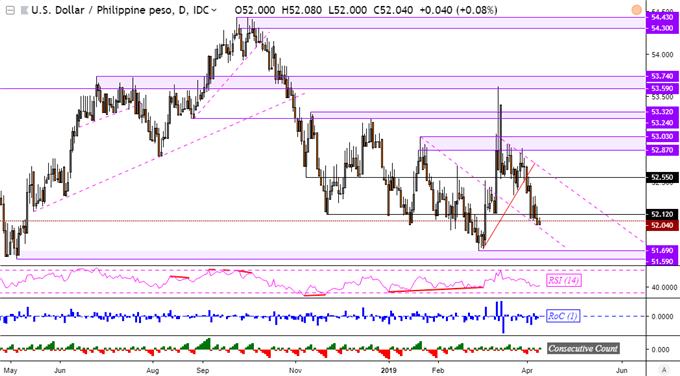 The Singapore Dollar continues consolidating against its US counterpart after a bounce on support around 1.3444 in late March opened the door to testing resistance just under 1.3616. USD/SGD is struggling to climb at this point as a falling trend line from late October seems to be pressuring the pair lower (red line on the chart below).

If it holds, then USD/SGD could soon be looking to test near-term support again. For the time being, its next potential dominant trend is still brewing. Until a breakout occurs, feel free to follow me on Twitter here @ddubrovskyFXfor more timely ASEAN FX updates. 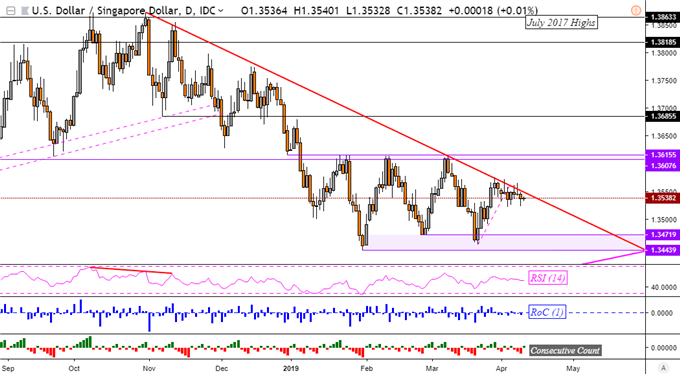