Yield spread between Treasuries and Bunds falls back

Government bonds issued by top-rated countries like the US and Germany are proving attractive to global investors spooked by fears that the US-China trade war could weaken the world economy and perhaps even lead to recession.

However, in recent days, buying of US Treasuries has lowered the yield on them by more than demand for German debt has reduced the yield on Bunds. That means Treasuries are now relatively less attractive against Bunds than they were – a development that could help EURUSD as more global investors buy the Euros needed to acquire German debt rather than the Dollars needed to buy Treasuries.

Currently, 10-year Bund yields are close to their record lows while 10-year Treasury yields are not far from two-year lows. However, the yield spread has narrowed sharply as the following chart shows. 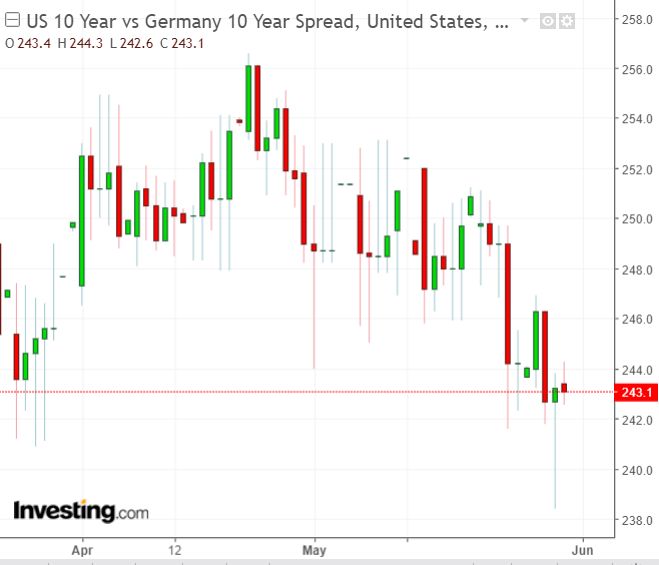 Source: Investing.com (you can click on it for a larger image)

A Brief History of Trade Wars

There are several caveats to this. First, US yields remain much higher than German yields so Treasuries remain more attractive than Bunds in absolute terms. Second, the return on Bunds remains negative – and indeed more negative than it was. Thirdly, the US Dollar is sometimes seen as a safe haven itself so the USD could benefit from the same risk aversion that is prompting the move from stocks to bonds.

Moreover, from a technical perspective, EURUSD remains in a downtrend and could fall further, as my colleague Justin McQueen points out here.

Nonetheless, at the margin, the latest move in the yield spread could at least slow its decline.