USDCAD dipped to the 1.3400 handle as upbeat USMCA news continues to put downward pressure on the currency pair. The recent move lower in USDCAD was likely exacerbated by gains in oil following reports that OPEC production cuts will be extended while recent Iranian conflict could further threaten global oil supply. 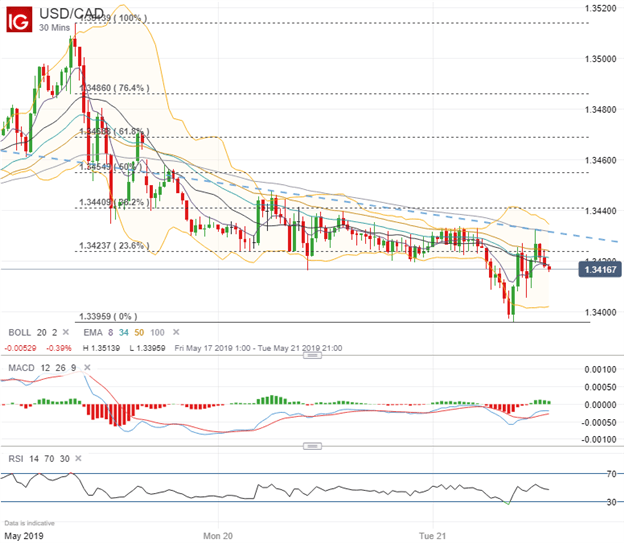 Although the Canadian Dollar looks to continue benefiting from an impending trade deal with the United States in addition to climbing oil prices, further downside in spot USDCAD could be limited over the short-term. One notable technical development during Tuesday’s session was the sharp rebound higher USDCAD notched after touching the 1.3400 price level – a major area of confluence which looks to serve as technical support.

If spot USDCAD continues to creep higher and breaks above the negative-sloping trendline drawn along the series of lower highs since last Friday, it might signal that the latest push lower in USDCAD may be running out of steam. This possible scenario could grow increasingly likely if the forex rate also overcomes technical resistance posed by the 23.6 percent and 38.2 percent Fibonacci retracement levels shown above. 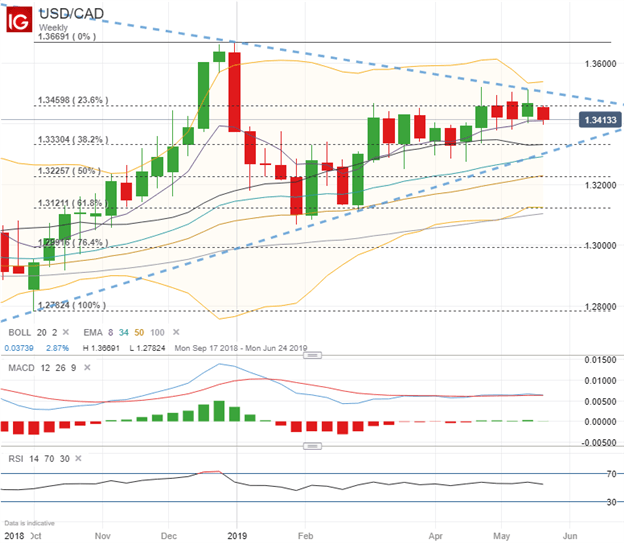 Looking at USDCAD with a broader perspective, spot prices also face resistance from the 23.6 percent Fibonacci retracement level drawn from the respective low and high in October and December last year. Yet the currency pair has failed to hold its footing below the 38.2 percent Fib since spot prices reclaimed the 1.3330 level back in March.

Moreover, a tight coil has formed between bullish uptrend and bearish downtrend lines which supplements the recent consolidation in USDCAD around the 1.3400 handle. This area of confluence could be put to the test in the near future, however, as conflicting upside and downside risks begin to unfold.

While the removal of US tariffs on Canadian steel exports boosts bullish prospects for the loonie along with rising oil prices, USDCAD downside could be offset by a sharp rise in the greenback if a hawkish Fed is revealed in the FOMC minutes release due Wednesday at 18:00 GMT.