The Indonesian Rupiah may be on the verge of gaining against the US Dollar. On the immediate chart below, USD/IDR is losing the battle in trying to surpass a falling resistance line from December. This comes after a bullish inverse head and shoulders reversal pattern which now appears to be losing its effect on the pair.

Taking a closer look reveals that a near-term rising support line from the beginning of this month has just been breached. With confirmation, the next target in a descent appears to be 14155 followed by 14010. Pushing through resistance entails clearing 14396 as the outermost boundary in the short term.

Follow me on Twitter here @ddubrovskyFX for updates in major moves in ASEAN currencies as well as fundamental developments in the interim. 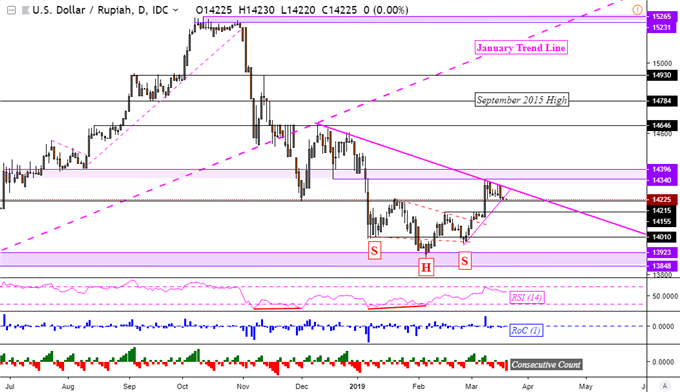 The Philippine Peso continues losing ground against the US Dollar amidst the fundamental backdrop of a potentially more dovish BSP. After clearing a descending range of resistance (parallel downward-sloping pink lines below), the dominant downtrend from September was and still remains at risk.

Watch if USD/PHP prices manage to break immediate resistance, which is a range between 52.87 and 53.03. Clearing it opens the door to testing 53.24, supported by a rising trend line from the beginning of March. Otherwise, turning around has 52.12 eyed as the next well-defined psychological support level below. 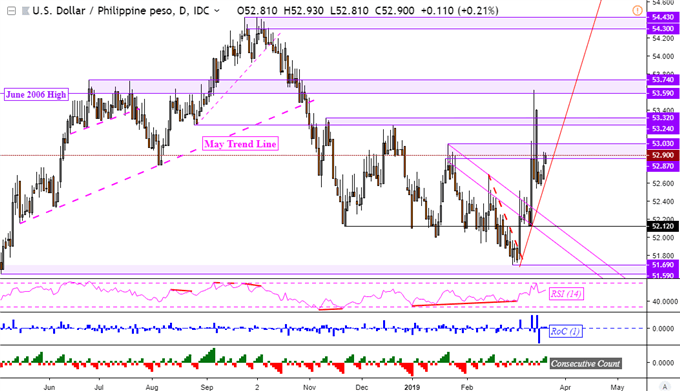 As expected, the US Dollar depreciated against its Singaporean counterpart throughout most of last week. USD/SGD ended up turning lower after resistance at 1.3615 held. This opened the door to testing the lower boundary of the pair’s consolidation, which has been going on since early 2019, at 1.3443.

However, the falling trend line from December (red dashed line on the chart below) appears to be holding up as new support after prices were unable to push through 1.3512 over the past two days. As such, this may precede a turn back to resistance. Otherwise, resuming the decline will once again test consolidation support. 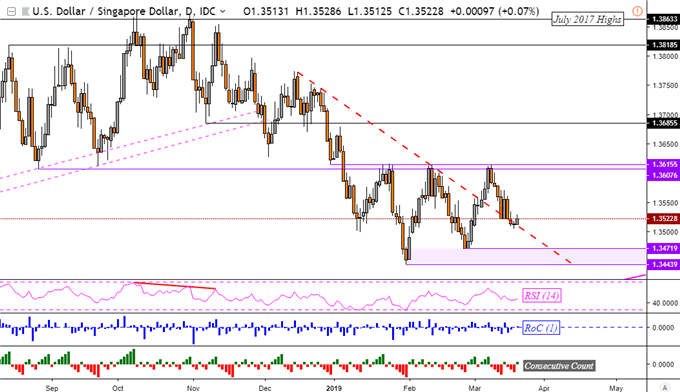 The Malaysian Ringgit may have more room to gain against the US Dollar in the near-term. After resistance in USD/MYR held at 4.0950, the pair turned lower and cleared a rising support line from the beginning of March (upward sloping pink line on the chart below).

This exposed a range between 4.0650 and 4.0610 that has behaved as support. Like the Singapore Dollar, USD/MYR also appears to be in consolidation mode when considering the medium-term outlook. Until a break is achieved outside of the ceiling and floor of its oscillation, expect more range-bound trade. 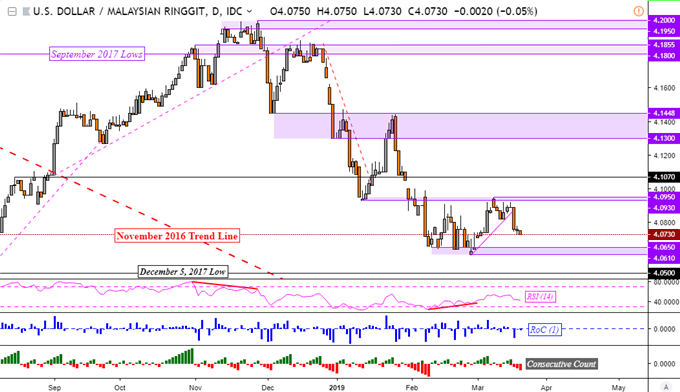