The anti-risk Japanese Yen outperformed against its major counterparts on Tuesday, strengthening alongside a general deterioration in market optimism as anticipated. The downturn in sentiment is likely being fueled by rising fears of a US-China trade war after President Donald Trump threatened to raise tariffs on Chinese imports on Monday. This came as a surprise in what until then seemed like good progress in negotiations.

Rising concerns in global markets can be seen reflected in the VIX volatility index. On the chart below, it climbed and closed at 19.32 which is its highest since late January. This follows a break above the falling resistance line from early 2019. A rising VIX reflects higher implied volatility which is derived from options contracts on the S&P 500. It is also commonly known as a ‘fear gauge’. 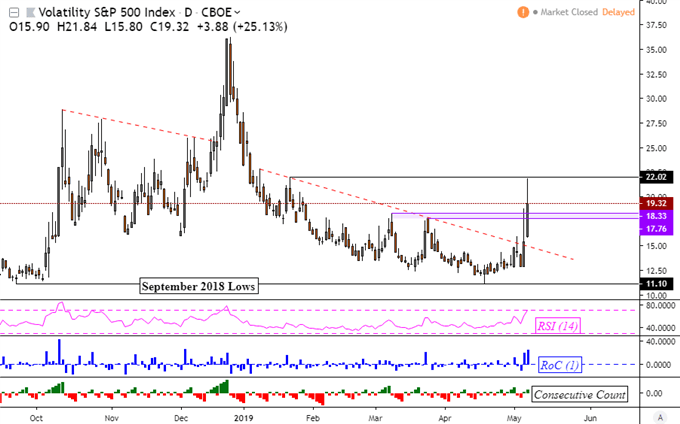 And rightfully so, the S&P 500 and Dow Jones fell 1.65% and 1.79% respectively in their worst days since late March. There is still a chance that US-China trade negotiations could end in a deal of some sort by the end of this week. It has been confirmed that China’s key trade negotiator, Liu He, will be visiting Washington alongside a team of delegates come Thursday. But, markets have become more doubtful of a breakthrough.

USD/JPY thus closed at its lowest since March 26 as its near-term downtrend continued. In the medium-term, the break under the rising trend line from the ‘flash crash’ in early January is a warning sign that we may get to support next around 109.76. If this is taken out with confirmation, which may be the case if trade talks breakdown and refuel global growth slowdown fears, 107.52 could be tested thereafter. 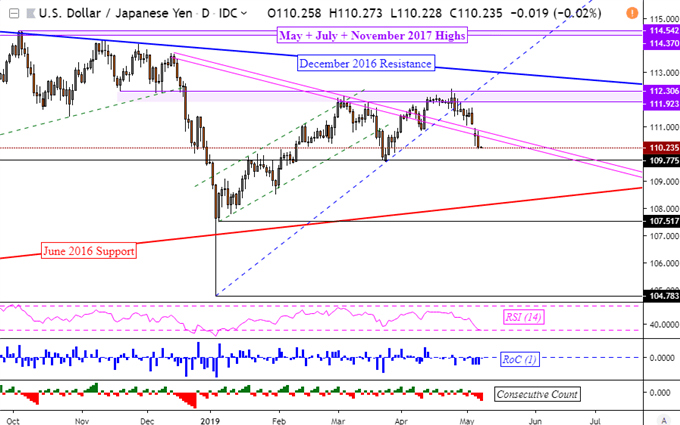 S&P 500 futures are pointing lower as we head into Wednesday’s Asia Pacific trading session, hinting that weakness in regional equities such as the Nikkei 225 may linger. This would add to the argument that more Yen gains could be in store. Also, with the RBA now behind us, the pro-risk Australian Dollar may focus on sentiment trends as well. As such, selloffs in stocks may add downside pressure towards AUD/USD.

NZD/USD is eyeing the RBNZ rate decision with markets anticipating a cut in the benchmark lending rate from 1.75% to 1.50%. Yesterday, the RBA surprised with a hold which translated into Aussie strength. However, unlike the RBA, the markets seem to be more confident that the Reserve Bank of New Zealand may cut.

According to Bloomberg economist surveys, 14 out of 20 estimates envision a cut. Relative to the RBA, the RBNZ has done a better job at preparing the markets for a cut, especially after recent softer employment and inflation data. Thus, a surprise hold could potentially carry more bullish implications for the New Zealand Dollar compared to what we saw with AUD/USD yesterday.

Join DailyFX Analyst David Cottle as he covers the RBNZ rate decision LIVEand the reaction in the New Zealand Dollar where he willalso be taking a look at what may drive it down the road!