The Japanese Yen continues to gain on the US Dollar in move with fundamental underpinnings in mounting global economic uncertainty and a general flight to haven assets.

However, USD/JPY’s fall has been arrested by what looks like key support before it has gone very far below the previously dominant downtrend. It’s important to note that month and quarter-end moves may also be magnifying activity and that things may not look as encouraging for Dollar bears as they might seem too.

All the same, the pair has slipped through the first, 23.6% Fibonacci retracement of this year’s rise. That came in at JPY110.86 a level which gave way in the middle of last week and has yet to be retaken- although the current market is not far away.

The next retracement level has so far proven more robust. It’s at JPY110.07, a point which has so far contained the enthusiasm of Dollar bears. 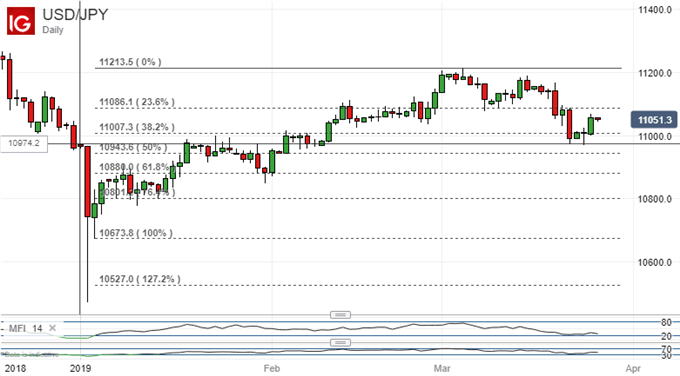 However, that first retracement level will now have to be retaken quite shortly if the pair is to avoid printing a potentially damaging lower low on its daily chart. Indeed it will need to close and stay above last Thursday’s intraday high of 110.97 in order to avoid that fate.

Failure to do so this week will put focus on the downside once again, with the 50% retracement point of JPY109.44 lying in wait if the downmove sharpens.

AUD/JPY meanwhile remains confined to the admittedly broad range in which it has meandered since early January.

Given the Japanese Yen’s prominent haven currency position and the Australian Dollar’s place at the other end of the risk spectrum this confinement is quite surprising. However, with momentum indicators unstretched in either direction there would appear to be very little incentive to do anything other than play this ample range.

A look at the monthly chart suggests that this cross is stuck in a very mild downtrend, which has taken it down to the lows of mid-2016.