Like yesterday, the US Dollar and Japanese Yen were the best-performing majors. These currencies can at times benefit during instances of risk aversion. Wall Street ended the day lower. The S&P 500 fell 0.22% in a day that contained mixed earnings reports from Boeing and Caterpillar with Facebook and Microsoft leading the better-than-expected pack. US front-end government bond prices rose into Wall Street open.

While the Canadian Dollar took an initial hit on the latest BoC rate decision, my index of CAD (see chart below) trimmed most of its losses by the end of the day. While the central bank dropped its rate hike bias, Governor Stephen Poloz reiterated their data-dependent approach during his press conference. In fact, he said that interest rates are more likely to rise than fall if the forecasts are right, undermining cut expectations. 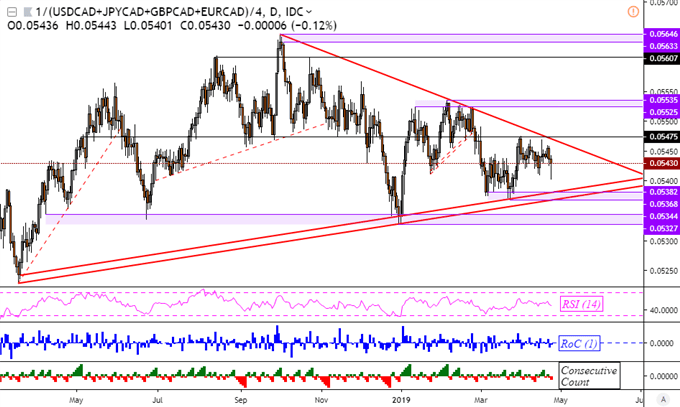 S&P 500 futures are pointing a little higher ahead of Thursday’s Asia Pacific trading session, perhaps bolstered by upbeat Facebook and Microsoft earnings which crossed the wires in after-hours trade. If this translates into gains for the Nikkei 225 or ASX 200, we may see the pro-risk Australian and New Zealand Dollars trim their losses over the past 24 hours. AUD/USD was especially weak following dismal CPI data.

At an unspecified time later today, we will get the Bank of Japan monetary policy announcement. Inflation is still well below their desired 2% price target with rates still negative alongside yield curve control measures. As such, their policy-setting tolls are likely to remain unchanged.

But, the central bank is facing increasing external headwinds as Prime Minister Shinzo Abe is expected to deliver the remaining portion of promised sales tax hikes in October. With that in mind, the Yen will be closely eyeing commentary from Governor Haruhiko Kuroda.

Ahead of the BoJ, USD/JPY is sitting right under key resistance at 112.31. The pair is being guided higher by a rising support line from the ‘flash crash’ in early January. This comes after climbing above the descending trend lines from the end of last year which has opened the door to testing December 2016 resistance. How USD/JPY behaves at 112.31 may determine its next major target. 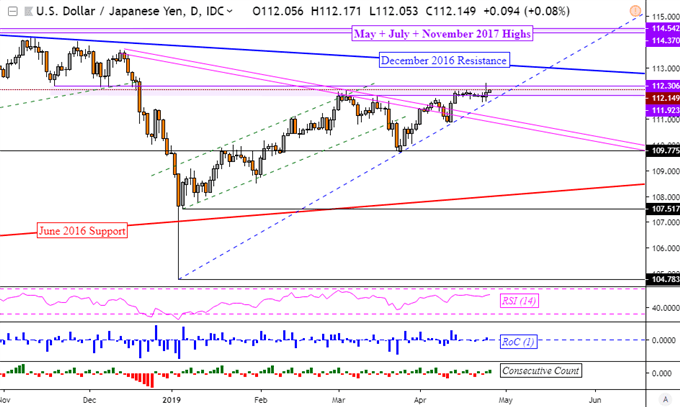