The Norwegian Krone and Swedish Krona may be thrown around this week by central bank-related events. On Thursday, the ECB will announce what many are expecting to be a hold on rates. What EUR/SEK traders will likely be paying attention to are comments from ECB President Mario Draghi following the rate decision.

Growth in Europe has been decelerating unexpectedly quickly, which may in turn force the central bank to revise down its inflation forecast. The already-gloomy outlook may be further dampened by the upcoming European Parliament (EP) elections which may hit markets particularly hard this year given the economic and political state of the EU. The ECB has repeatedly cited political risk in Europe as a factor influencing monetary policy.

Because so much of Sweden’s and Norway’s economic activity depends on strong EU growth, comments from ECB officials that signal a worse-than-expected outlook may weaken the export-heavy Nordic currencies. This in large part has to do with the unique political economy of EU-Nordic relations.

Adding to the European front, Bank of England (BoE) Governor Mark Carney will be testifying to the House of Lords, which will almost certainly include comments and questions on Brexit. Many Riksbank officials have commented that risks from abroad – namely the EU/UK divorce – have been a key concern for Swedish monetary policymakers.

In the United States, a round of key economic data releases may give key insight on the Fed’s intentions and outlook. That has scope to influence the spectrum of Dollar-based currency pairs, including USD/SEK. Fed Chairman Jerome Powell will be giving a speech on monetary policy normalization Saturday, but that is likely to show up in the subsequent week’s price action.

Outcomes carrying dovish implications may initially cause USD/SEK to fall. It may then seesaw higher however if worries about slower growth induce risk aversion and cause investors to dump SEK and instead flock to the anti-risk US Dollar.

Last week, the Chairman went through several Congressional testimonies which didn’t appear to have a significant impact on the pair. This may be in large part due to the comments being broadly in line with his previous commentary. Better-than-expected US GDP and disappointing ISM data did inspire volatility however, with USD rising in both cases.

INDICATORS TO WATCH OUT FOR IN SWEDEN, NORWAY

In Sweden, the economic calendar remains relatively light, which means the export-driven currency may be on particularly high alert on risks from abroad. SEK may move on commentary from Riksbank officials on Thursday and Friday but could be overshadowed by global macroeconomic themes. This is opposite to last week’s schedule when better-than-expected GDP caused USD/SEK to plunge and temporarily reverse its upward trend.

In Norway, GDP and industrial production may be points of interest for NOK traders in addition to the events from abroad. Due to the country’s strong reliance on the Petroleum sector, the oil-linked currency may be particularly sensitive to changes in market sentiment, particularly if it is coming out of Europe.

Despite only contributing a small portion to the world’s total output for crude oil, Norway is one of the top exporters of natural gas. With the EU as its biggest client, any change in demand in the European continent will be quickly reflected in the country’s exports and may therefore impact the Krone and OBX, Norway’s benchmark equity index.

Since the start of the year, USD/SEK is up over four percent, with the peak on February 19 when the pair extended past 9.4066 after various measures of CPI data in Sweden all fell short of expectations. The monthly chart shows USD/SEK up for the month and is now reaching heights not touched since December 2016 and March 2009. 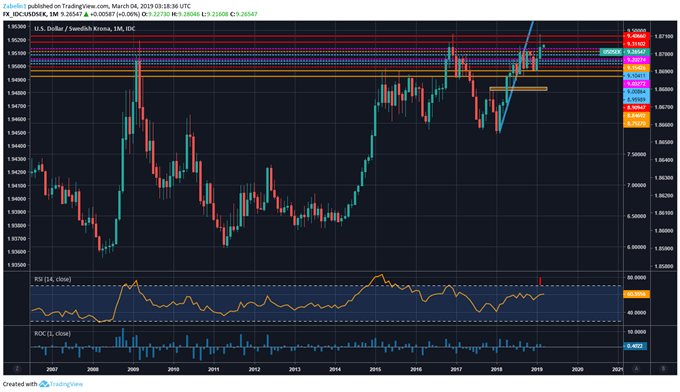 Sweden’s benchmark OMX equity index has risen over 15 percent since the start of the year but recently broke its steep support line after negative RSI divergence signaled weakening upside momentum. This steep incline appears to be the result of the Riksbank’s loose monetary policy and investors’ expectations that rates will remain low and conducive for countering downtrends in the business cycle. 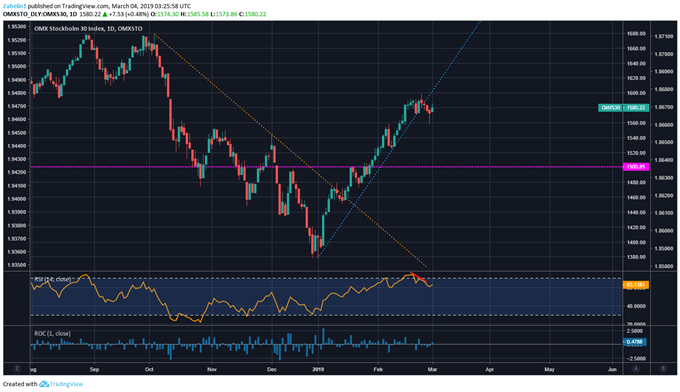 USD/NOK also appears to be aiming for new heights not tested since 2016. Given the slower growth in Europe, it possible this upward trend will continue as exports to the continent weaken and impact the Krone. The Norges Bank has stated it will most likely raise rates this month, but if the outlook weakens and domestic economic data underperforms it could be pushed further into the year.

Since the start of 2019, Norway’s OBX stock index has risen a little over 10 percent but is struggling to consistently trade above 805.00. The movement in the benchmark index very closely mirrors the movement in crude oil prices, demonstrating Norway’s strong reliance on the petroleum sector. When overlaid with a Krona-weighted index, the three move in almost perfect harmony.

Because oil is a sentiment-linked asset which frequently responds to changes in global demand, monitoring events which may sour risk-on behavior might be a prudent approach when trading NOK. However, it is not guaranteed that one will always predict the other. Correlation is not the same as causation. 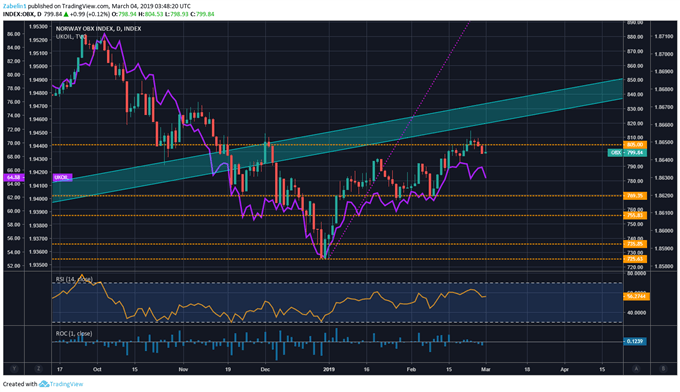