On April 12, USD/SGD rallied in early Friday trade following the latest Monetary Authority of Singapore policy statement and first quarter GDP data. Heading into these developments, the Singapore Dollar, which tends to closely track the US Dollar, was already under pressure by a stronger Greenback. On Thursday, a slew of positive local data lifted front-end government bond yields as Fed rate cut expectations were reduced.

The central monetary authority, after slightly increasing the slope of the SGD nominal effective exchange rate twice, opted to hold it, the width and center of the currency band unchanged. For those that are unfamiliar, the MAS conducts monetary policy by targeting the currency’s exchange rate, keeping capital flowing freely between its borders. This involves giving up control over lending rates as Singapore’s economy relies heavily on trade.

The pause in its effort to boost the Singapore Dollar, thus keeping a lid on overall inflation in the nation, occurred alongside a downgrade in core CPI estimates for this year. Now, price growth is anticipated to clock in between 1-2% from October’s estimate of stabilizing just under 2%. Amidst the backdrop of slowing momentum in the global economy, the MAS anticipates GDP to come in below expectations as well.

This was underlined by the first estimate of Q1 2019 GDP which crossed the wires 1.3% y/y versus 1.4% expected. This is down from 1.9% in the fourth quarter and is the softest outcome since the fourth quarter of 2015, over three years ago. On the immediate chart below, you can see the reaction in USD/SGD on the 15-minute chart when these developments crossed the wires. 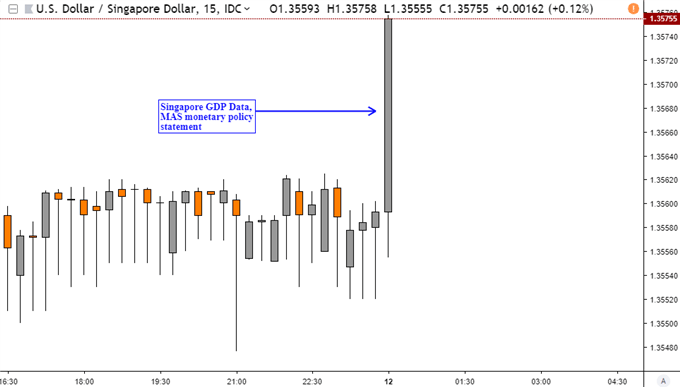 On the daily chart, USD/SGD broke above the well-defined falling trend line from October, opening the door to overturning the dominant downtrend since then. However, and as noted in this week’s ASEAN technical outlook, the Singapore Dollar needs to clear resistance next at 1.3616. Otherwise, this would open the door to more consolidation in the medium-term. For more updates on the Singapore Dollar, you can follow me on Twitter here at @ddubrovskyFX. 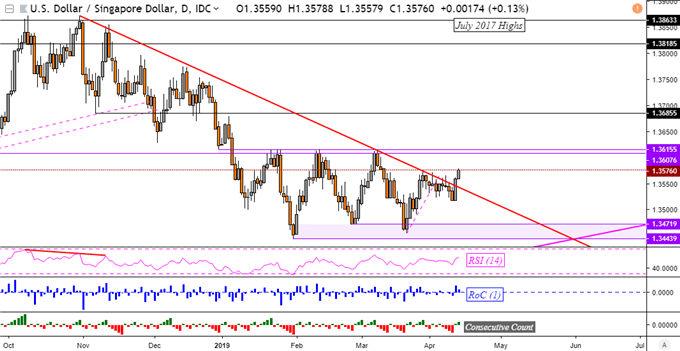