The near-term breakout in USD/CAD appears to have stalled ahead of the 2018-high (1.3665) as the updates to the U.S. Gross Domestic Product (GDP) report point to slowing inflation, and the exchange rate may continue to consolidate ahead of the highly anticipated Non-Farm Payrolls (NFP) report as it snaps the series of higher highs & lows from earlier this week. 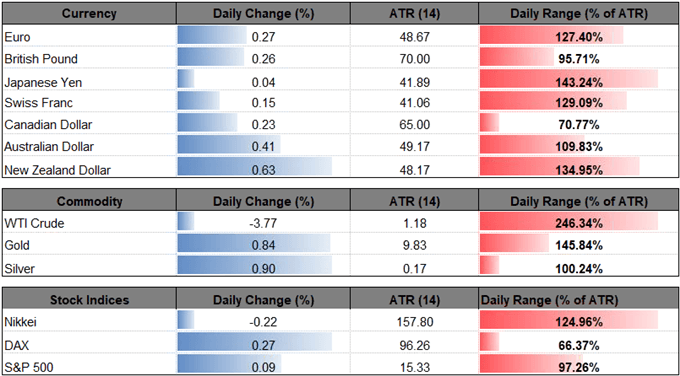 USD/CAD pares the advance following the Bank of Canada (BoC) meeting even though the U.S. economy expands 3.2% during the first three-months of 2019 as the core Personal Consumption Expenditure (PCE), the Federal Reserve’s preferred gauge for inflation, narrows to 1.3% from 1.7% per annuum in the fourth-quarter of 2018.

The GDP report indicates there’s little to no risk of an imminent recession as economic activity picks up from the 2.2% rate of growth during the last three-months of 2018, but signs of slowing inflation may push the Federal Open Market Committee (FOMC) to adopt a more accommodative stance as the central bank plans to winddown the $50B/month in quantitative tightening (QT) over the coming months. 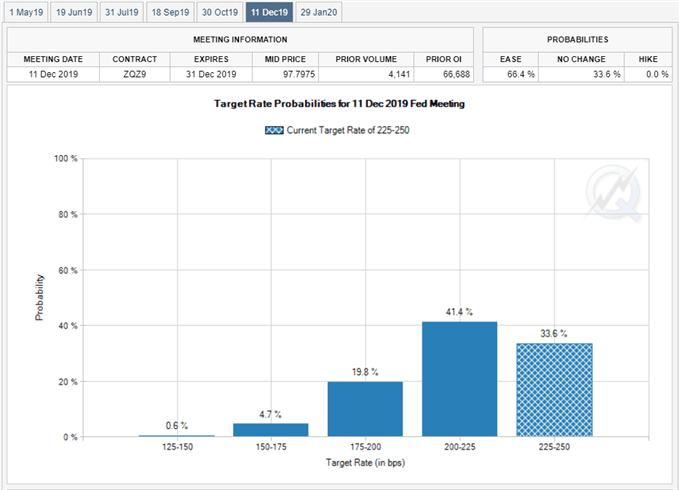 In fact, Fed Fund Futures now reflect a greater than 60% probability for a rate-cut in December as the FOMC struggles to achieve the 2% target for inflation, and it remains to be seen if Chairman Jerome Powell & Co. will continue to project a longer-run interest rate of 2.50% to 2.75% as the central bank pledges to be ‘data dependent.’ As a result, market participants may pay increased attention to the NFP report as the FOMC is widely anticipated to retain the current policy on May 1, and the fresh update may instill an improved outlook for the region as the U.S. economy is projected to add another 181K in April, with Average Hourly Earnings expected to increase to 3.3% from 3.2% the month prior.

The lack of urgency to alter the forward-guidance may keep the U.S. dollar afloat as some Fed officials insist that ‘if the economy evolved as they currently expected, with economic growth above its longer-run trend rate, they would likely judge it appropriate to raise the target range for the federal funds rate modestly later this year,’ but the USD/CAD breakout following the BoC meeting appears to have stalled going into the weekend, with the exchange rate at risk for a larger pullback as it snaps the series of higher highs & lows from earlier this week.

Keep in mind, the near-term outlook for USD/CAD remains constructive as the exchange rate clears the range-bound price action from March, with the Relative Strength Index (RSI) highlighting a similar dynamic as the oscillator takes out the bearish formation from a similar timeframe. 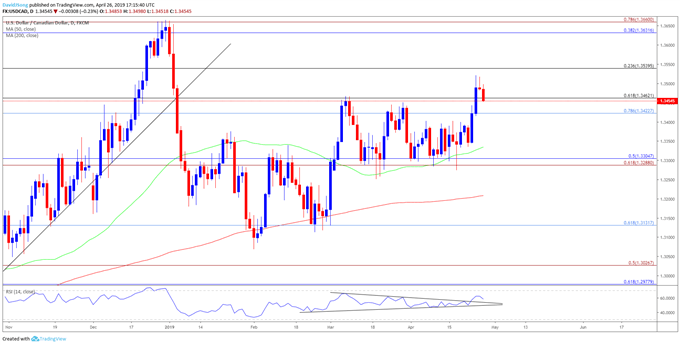