USDCAD stands at risk of exhibiting a more bearish behavior ahead of the Federal Reserve interest rate decision on June 19 as the exchange rate snaps the upward trend from earlier this year.

USD/CAD takes out the April-low (1.3274) following the updates to the U.S. Non-Farm Payrolls (NFP) report as the 75K expansion in employment puts pressure on the Federal Open Market Committee (FOMC) to insulate the economy.

Signs of a less robust labor market may push the FOMC to change its tune as a separate report shows job openings narrowing to 7449K from a revised 7474K in March, andthe central bank may alter the forward guidance for monetary policy as President Donald Trump insists that tariffs on Chinese goods can go “much higher than 25%.”

In fact, Fed officials may have little choice but to respond to the ongoing shift in trade policy as the Trump administration relies on tariffs to push its agenda, and Chairman Jerome Powell and Co. may ultimately project a lower trajectory for the benchmark interest rate as the ongoing trade dispute between the U.S. and China dampens the outlook for global growth. 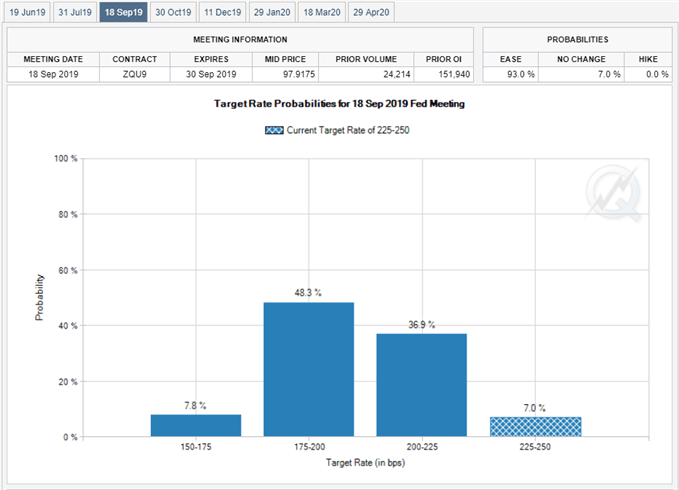 As a result, Fed Fund futures may continue to reflect a greater than 90% probability for a September rate-cut, but it remains to be seen if the FOMC will switch gears over the coming months as “a fewparticipants noted that if the economy evolved as they expected, the Committee would likely need to firm the stance of monetary policy to sustain the economic expansion and keep inflation at levels consistent with the Committee’s objective.”

Nevertheless, speculation for an imminent change in U.S. monetary policy is likely to keep USDCAD under pressure, with the exchange rate at risk of extending the decline from the May-high (1.3565) as it snaps the upward trend from earlier this year. 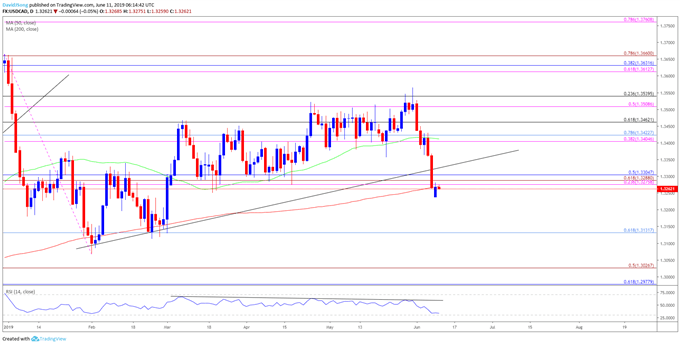