The Canadian Dollar (CAD) slipped following Wednesday’s BOC meeting decision where the central bank announced it will leave its policy interest rate unchanged at 1.75 percent as expected. The currency has since made an attempt to trim recent losses against major counterparts so far during Thursday’s trading session, but price action appears to hinge largely on Friday’s upcoming economic data that has potential to send CAD crosses swinging.

Taking the spotlight for the CAD will be the country’s Q1 GDP report slated for release at 12:30 GMT. Canada is expected to report year-over-year economic growth of 1.2 percent which is up marginally from the prior period’s 1.1 percent reading. A report that beats market consensus has potential to bolster the loonie and claw back some of the recent losses printed over the last week.

China’s Manufacturing PMI will likely set the tone for risk appetite early Friday and has potential to weigh heavily on CADJPY. If a reading below consensus crosses the wires, a pessimistic reaction from market participants might send forex traders unwinding JPY-funded carry trades which would likely bid up the Japanese Yen and push CADJPY lower. On the contrary, an upbeat PMI report could inspire risk taking and send CADJPY higher.

EURCAD might get a jolt from Germany’s May CPI reading due for release at 12:00 GMT tomorrow. Weak Eurozone price pressure could indicate further sluggish economic activity, which would likely weigh negatively on the Euro, whereas a number reported above estimates has potential to boost EURCAD. Although, the Euro has come under a bit of pressure following the EU Parliamentary election results which showed Eurosceptic parties gaining support. Yet, global risk aversion has pushed German Bund yields lower recently which can boost demand for Euros. 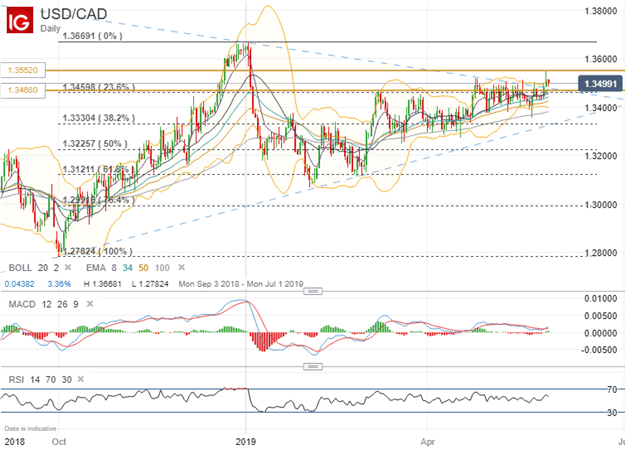 USDCAD overnight implied volatility reading of 5.92 percent can be used to estimate a 1-standard deviation trading range of 1.3468 to 1.3552. Spot prices holding above the 1.3500 handle will likely reiterate a bullish bias and could push USDCAD to test the upper bound of the option-derived trading range. If the Canadian Dollar gains ground tomorrow, however, USDCAD could flirt with support from the 23.6 Fibonacci retracement line drawn from October’s low to January’s high. 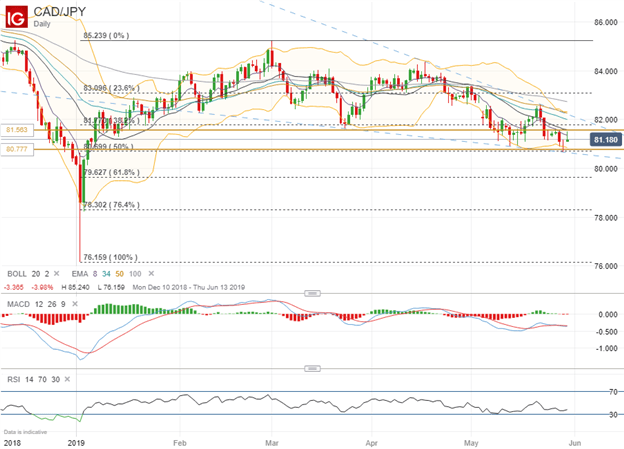 CADJPY is calculated to trade between 80.777 and 81.563 tomorrow with a 68 percent statistical probability judging by the overnight implied volatility reading of 9.26 percent. Spot price upside could be short lived, however, as the 38.2 Fibonacci retracement level from the year-to-date high and low looks to pose as technical resistance. Although, the currency pair may continue to form its falling wedging pattern and retest the 50 percent retracement level for support once again before turning higher. 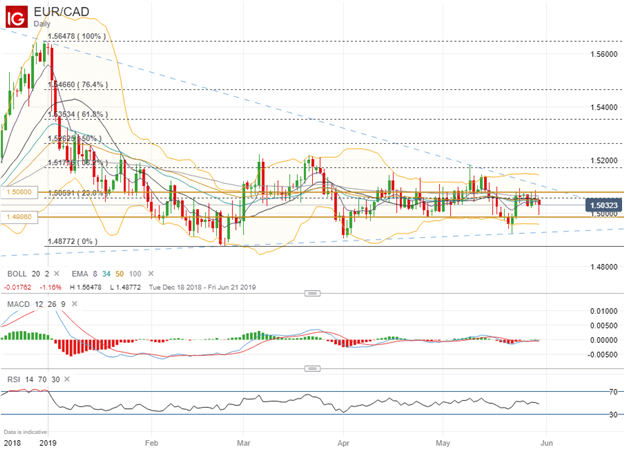 Judging by EURCAD overnight implied volatility of 5.97 percent, spot rates are estimated to range between 1.4986 and 1.5080 with a 68 percent statistical probability. EURCAD looks to face technical resistance from the 23.6 percent Fibonacci retracement level drawn from the year-to-date high and low while psychological support at the 1.5000 handle could limit EURCAD downside.