– A trio of weak economic data releases have undercut the US Dollar this morning: personal income, personal spending, and the PCEs all missed expectations.

– Signs that the Canadian economy rebounded in January proved prescient, as a beat on the first GDP report of 2019 has helped trigger a spike higher by the Canadian Dollar.

– USDCAD’s daily move is already its largest down day since February 22.

With all eyes in the financial world awaiting the latest Brexit news this week – today was the original deadline for the UK leaving the European Union, after all – the economic calendar has been largely pushed to the backburner, and with it, any attention to meaningful developments on the data front.

But the round of North American economic data this morning proved to be a double-tap hit on USDCAD, with January Canadian GDP figures beating expectations and all three US data releases missing expectations.

The Fed’s preferred gauge of inflation is the Personal Consumption Expenditure measure, or PCE, more so than the headline CPI release each month (similarly, they prefer PCE Core to Core CPI). To this end, the recent dovish shift at the March Fed meeting appears to be vindicated as the latest round of price data shows that PCE Core readings were heading lower. At only 1.8% y/y in January, this is the lowest reading since February 2018.

US Consumer’s Health Takes a Hit

With concerns starting to emerge that the US economy is heading towards a recession – not just because key aspects of the US Treasury yield curve inverted, but there are concerns that the US government shutdown weighed considerably on Q1’19 US GDP – data released today won’t help soothe fears. February US Personal Income came in below expectations at 0.2% m/m, as did January US Personal Spending at 0.1% m/m, and so too did January US Real Personal Spending at 0.1% m/m.

The Atlanta Fed’s GDPNow growth tracker, which had rebounded to 1.5% annualized at its most recent update from as low as 0.2% in early-March, is likely to see a dip lower again following today’s US economic data.

As disappointing as the US economic data releases were for the US Dollar, the opposite can be said about the January Canadian GDP report and its impact on the Loonie. At 0.3% m/m and 1.6% y/y, both measures beat expectations. Ahead of the release, expectations were biased to the upside given that Crude Oil prices rebounded by 18.5% in January; nearly 11% of the Canadian economy is tied to oil.To this end, during January, the Citi Economic Surprise Index for Canada gained from 11.1 to 43.7.

Here are the US economic data weighing on the US Dollar this morning: 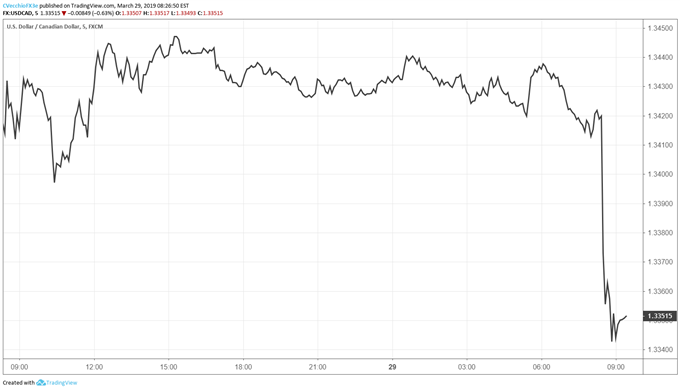 Following the mix of stronger Canadian and weaker US economic data, USDCAD immediately dropped from just below 1.3320 to as low as 1.3344 in the ensuing minutes.

The price reversal came on the heels of not only Fed funds continuing to pull forward expectations of a September rate cut (58% yesterday versus 60% today), but odds of a rate cut over the summer by the Bank of Canada have eased as well, having come into today at a 48% chance of a September cut, to where they stand after the data, at 31%.