USDCAD remains under pressure ahead of the U.S. Non-Farm Payrolls (NFP) report as Federal Reserve officials change their tune, and the exchange rate may continue to retrace the advance from the April-low (1.3274) as it initiates a series of lower highs and lows.

Recent comments coming out of the Federal Reserve suggest the central bank will ultimately respond to the shift in U.S. trade policy as Chairman Jerome Powellinsists that the committee “will act as appropriate to sustain the expansion,” and USDCAD may continue to depreciate ahead of the Federal Open Market Committee (FOMC) interest rate decision on June 19 amid growing speculation for a change in regime. 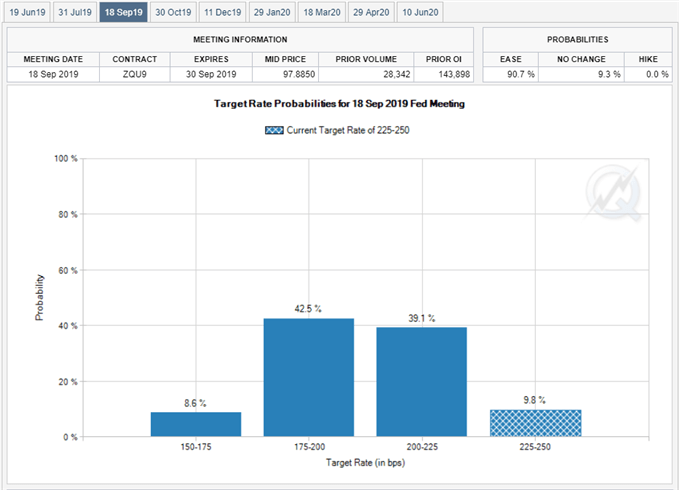 In fact, fresh developments coming out of North America may do little to influence the monetary policy outlook even though the NFP report is anticipated to show a 175K expansion in May as Fed Fund still reflect a greater than 90% probability for a September rate cut.

As a result, Chairman Powell and Co. may forecast a lower trajectory for the benchmark interest rate as the Trump administration continues to rely on tariffs to push its agenda, and the central bank may introduce a dovish forward guidance as Fed Governor Lael Brainard, a permanent voting member on the FOMC, adds that “trade policy is definitely a downside risk to the economy.”

In contrast, the Bank of Canada (BoC) may face a different fate as the Canadian economy is anticipated to add another 5.0K jobs in May following the 106.5K expansion the month prior.

Signs of a robust labor market may keep the BoC on the sidelines as “the slowdown in late 2018 and early 2019 is being followed by a pickup starting in the second quarter,” and Governor Stephen Poloz and Co. may largely endorse a wait-and-see approach at the next meeting on July 10 as “the Bank expects CPI inflation to remain around the 2 per cent target in the coming months.”

With that said, speculation for an imminent change in U.S. monetary policy may keep USDCAD under pressure, and the near-term outlook for USDCAD is no longer constructive as the advance from the April-low (1.3274) stalls ahead of the 2019-high (1.3665).