The Japanese Yen has returned to the defensive against the US Dollar after a period of daily-chart strength last week, with USD/JPY well illustrating the value of Fibonacci retracement levels to technical analysis.

Between April 7 and 10 the pair retreated below the uptrend channel which had previously bounded trade since the lows of March 25. A surge in market risk aversion saw the Dollar and Yen locked in a ‘battle of the havens’ which the latter seemed to be winning. USD/JPY saw three consecutive days of quite heavy falls up to April 10. 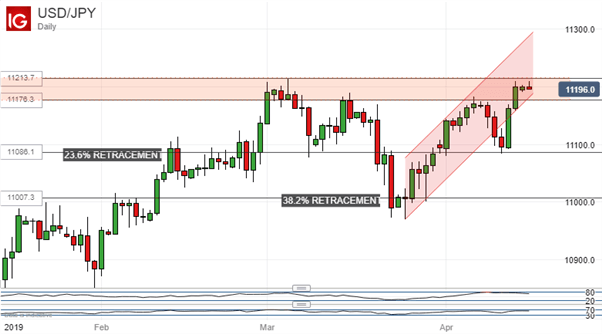 That came in at 110.86 which, not at all coincidentally, was the intraday low of April 10. Since then the pair has edged albeit gingerly back into that uptrend channel and, perhaps as significantly, risen back into the important resistance zone composed of the previous significant highs. They were struck in early March.

It is notable however that USD/JPY remains biased towards the bottom of its uptrend channel and has yet to seriously threaten the top of that resistance band. It doesn’t look terribly overbought according to its momentum indicators so the uncommitted might be well advised to wait a couple of days and see how things go.

If the Dollar can remain comfortable in both uptrend and resistance zone, then it might not be unreasonable to expect a further push higher. That said the next significant top is December’s 113.69 and that will probably remain too much for the bulls to hope for anytime soon. Falls are likely to find support again at that first retracement level, with the second waiting below at 110.07.

Against the British Pound the Japanese Yen remains all-too predictably bounced around by the seemingly endless twists of the Brexit story. 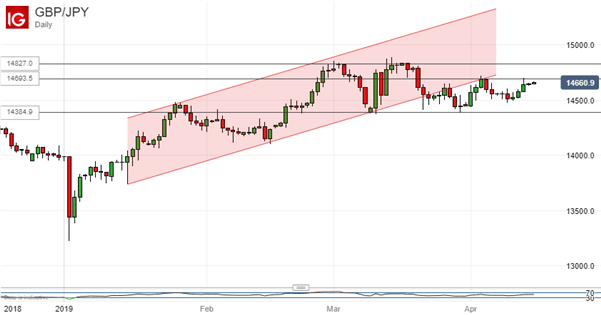 That said the cross remains within the very broad trading band which has marked trade since mid-February, even if the old daily-chart uptrend now looks a bit historic.

It is perhaps notable however that there is some risk of a lower high on the chart if April 4’s peaks of 146.94 can’t be topped. They’re not far above the market by any means, and they may well give way. But they haven’t yet and, if they don’t it could be a bearish sign threatening at least a retest of key support at 143.85.