The latest jolt of uncertainty surrounding the US China Trade War has sent forex traders flocking into anti-risk currencies like the Japanese Yen. Prior to President Trump’s tweets on Sunday which threatened to raise tariffs on Chinese exports, USDJPY was trading near the 111.50 mark. Spot USDJPY has since plummeted over 1.5 percent and currently trades below the 110.00 price level. 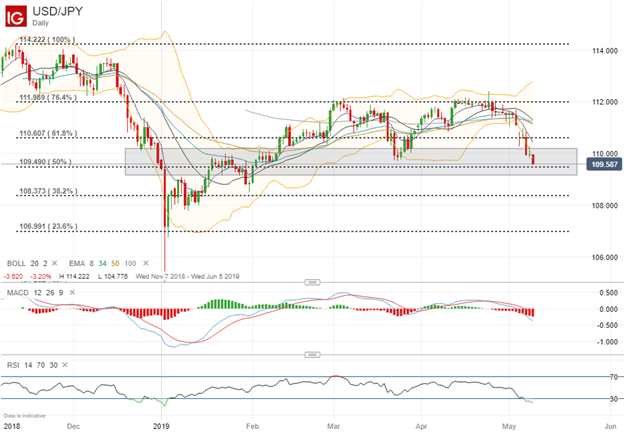 Following the nosedive in spot prices since Friday, USDJPY now appears to be hovering slightly above technical support near the 109.50 handle. A level of confluence has formed here which aligns closely with the 50 percent retracement line drawn from the high recorded on November 12 last year and flash crash low printed January 2.

This area of consolidation has previously served as resistance back in late January. After USDJPY broke through this level earlier in the year, the resistance turned into support which was tested and held towards the end of March. 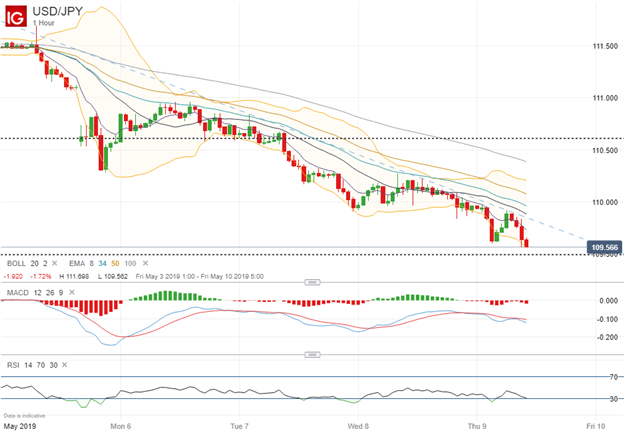 If the ongoing trade war between the US and China remains unresolved while tension further escalates between the world’s two largest economies, the Japanese Yen may continue to appreciate and outperform other safe-havens like gold and the US Dollar.

Although near-side support at 109.5 has potential of propping up spot USDJPY, prices have potential of breaking through this level if trade negotiators are unable to improve rhetoric and market sentiment remains subdued. In that event, USDJPY could potentially target the 38.2 percent Fibonacci retracement line for its next support level.