The Japanese Yen has yet to surrender a key short-term psychological resistance point to the US Dollar, but it may do so very soon.

USD/JPY remains well within the uptrend channel which has bounded trade for much of this year. However, the JPY112.00 level has capped the market. The pair has failed to get above there on a daily closing basis despite coming close in the last three weeks and even topping that point intraday on March 1. 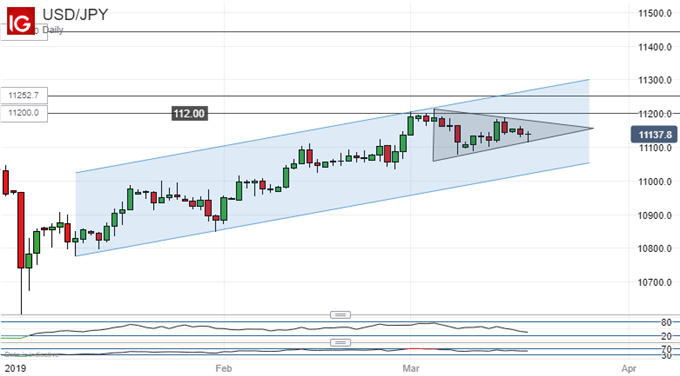 Now however we can clearly see the convergent uptrend and downtrend lines of a pennant formation on the daily chart. This is what’s usually known to technical analysts as a ‘continuation pattern.’ What that means is that the previous market impulse is likely to be regained once the pattern has been broken.

Clearly that looks like quite good news for US Dollar bulls as it implies that USD/JPY will resume its rise, probably quite soon.

Whether or not it can get comfortable above the 112.00 point and prime itself for another attempt at the peaks of late 2018 is much more debatable. However, playing for continued modest gains at least seems like the most sensible plan for now.

Against the Australian Dollar meanwhile, the Japanese currency looks rather stuck. Scrappy range trade with many narrow daily ranges has dominated this cross since at least early January.

The Australian Dollar is inching steadily upward within that range though, possibly getting something of a tailwind from USD/JPY’s current sedate rise.

However, this range has been tenacious and the peak remains some way above the market at JPY79.83. If general risk appetite holds up, the cross might be able to get there, but it’s worth noting the possibility of a lower low within the current range unless the Aussie can manage to nudge above that range top.

As that looks far from certain, playing the range seems like the best idea.