The Japanese Yen remains broadly on the defensive against the US Dollar and seems likely to remain so for as long as fundamental risk appetite holds up.

USD/JPY remains within the well-respected daily-chart uptrend which has held sway since January 10 and which is itself a continuation of the longer rise up from the recent significant low, which was printed on January 2. 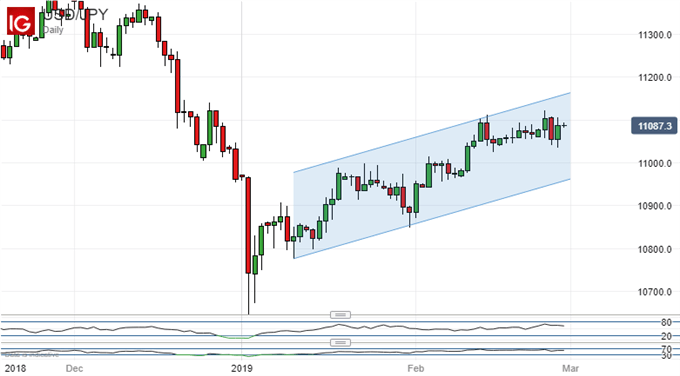 While a channel break either way doesn’t look immediately likely, the pair is clearly much closer toward the channel top than it is to the base and, within the channel has just managed to print a higher-high. Monday’s close this week put USD/JPY above February 13’s top of 113.07, which was also the last time the channel top was tried and rejected.

Admittedly the pair as seen some sharp down days, when risk appetite has diminished but until a break is confirmed there seems little better short-term option than continuing to play the channel. It now offers resistance at 111.59 a point which would appear to be too far above the market for an immediate test unless daily ranges start to widen once more.

Immediate support looks to be around 110.33, where the 23.6% Fibonacci retracement of this year’s rise kicks in.

Bulls of the British Pound are doing well against the Japanese Yen, meanwhile, as they are against most other currencies as markets speculate about a delay to Brexit, or the diminishing chance of a damaging ‘no deal’ walkout for the UK. 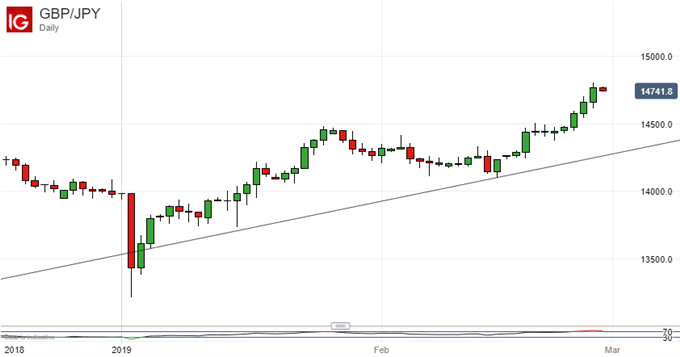 Whatever the merits of these prognoses, GBP/JPY is now back up to highs not seen since late last year, with a solid uptrend in place from the lows of January, 2019. That said the Pound now looks unsurprisingly overbought and probably ready for a little consolidation.

Should that occur and take the cross no lower than the previous significant peak then Sterling bulls will probably remain in the driving seat overall. That peak was 144.54 and it was printed intraday on January 25