The Norwegian Krone received a boost Thursday as a hawkish stance by Norges Bank pointed to a rate hike next month. Coupled with a positive Norwegian economy, both EURNOK and USDNOK weakened even though lingering trade concerns and softening oil prices could threaten the economy’s expansion.

In March, the Central Bank decided to increase rates by 0.25 percentage points to 1.0%, as economic expansion was stronger than earlier anticipated. Despite leaving rates unchanged in May, Norges Bank has been the outlier to a general dovish stance from central banks and said Thursday that a rate hike is on the cards for its next meeting in June.

The Norwegian economy has been booming and this is mostly due to an increase in energy-related investments, resulting in inflation rising above the central bank’s target level. The Norwegian Oil and Gas Association (NOG) has predicted that investment in Norway’s oil industry will rise by 16% year-on-year to 184.5 billion crowns in 2019, beating previous expectations of 135 billion crowns.

Despite oil prices being as high as $110 per barrel in mid-2014, an unhealthy cost structure across the industry meant that companies were still experiencing negative cash flows. But a recent restructuring in the industry has led to increased efficiency and competitiveness, reducing the breakeven price for Norwegian oil projects to around $25-30 per barrel, well below current market prices for oil. This has led to an increase in energy-related investments, helping to boost the economy and tighten the jobs market.

Since its previous meeting, the Norwegian Krone has continued to weaken against the US Dollar, something that Norges Bank was not anticipating. Additionally, oil prices have increased since its last policy meeting in March. Both these factors strengthen the chances of the central bank increasing rates in the second quarter of 2019, but the focus will be on the development of trade talks and recent softening oil prices, which could have the potential to turn the Norges Bank slightly more dovish. 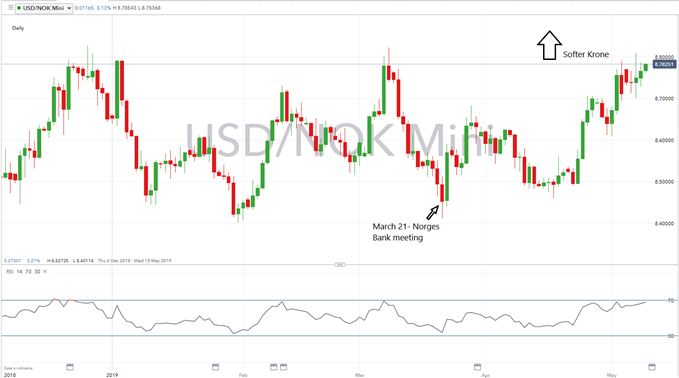 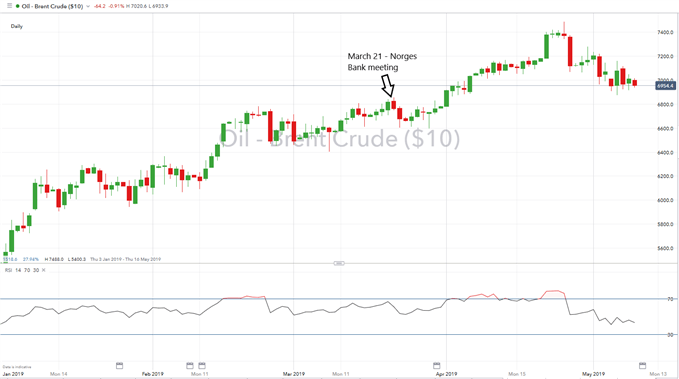