Trade all the major global economic data live as it populates in the economic calendar and follow live coverage for key events listed in the DailyFX Webinars. We’d love to have you along.

As anticipated, the Philippine Peso weakened against the US Dollar after USDPHP struggled clearing near-term support. That is a range between 51.59 and 51.69 which also encompasses lows achieved back in May 2018. Prices did however struggle clearing immediate resistance around 52.12 on the chart below.

If that area is broken ahead, that would expose 52.37. Otherwise, resuming losses since the middle of May opens the door for another retest of 51.59. For timely fundamental and technical updates on ASEAN currencies, you may follow me on Twitter here @ddubrovskyFX. 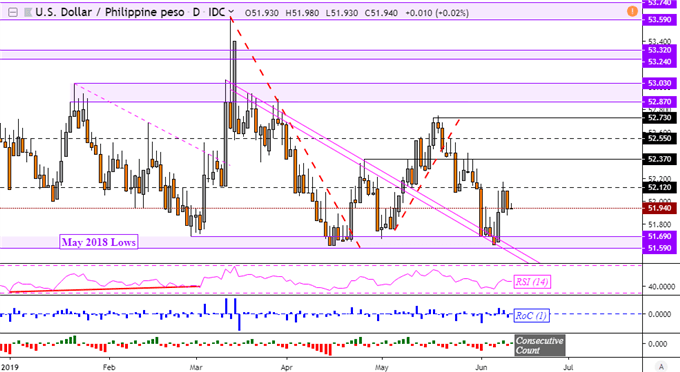 Against the Malaysian Ringgit, the US Dollar appears to be making a slight reversal to the upside after USDMYR adhered to a near-term rising support line from late April. If it holds, this could lead to a retest of a key psychological barrier between 4.1800 and 4.1855.

On the flip side, falling through the rising trend line (red line below) exposes the next area of support which appears to be around 4.1448. This price, since December, has acted as both support and resistance on multiple occasions. This would also follow the break under the rising trend line from early April (red dashed line). 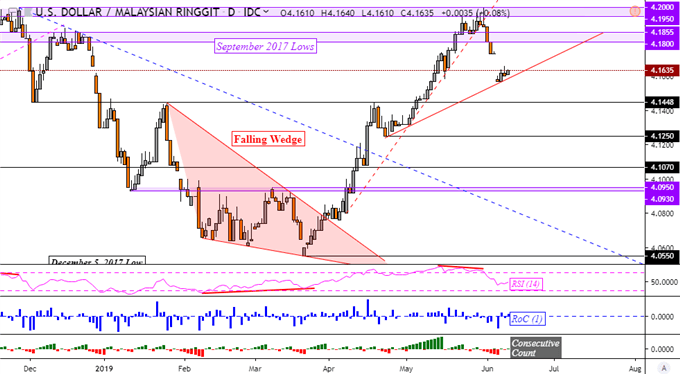 Meanwhile, USDSGD has made cautious progress to the downside following the break under the rising trend line from the middle of April. Prices have slowed their descent after a key support range between 1.3608 and 1.3616 prevented a breakout to the downside.

This leaves the Singapore Dollar oscillating against its US counterpart, stuck between that and near-term resistance around 1.3658. A breakout to the downside exposes 1.3575 while reversing recent losses opens the door to retesting 1.3774, which is the December 2018 high. 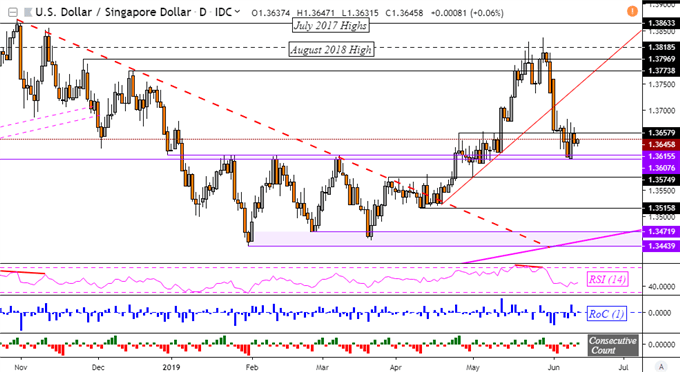 Similar to what we have seen in the Singapore Dollar, the Indonesian Rupiah has also slowed its gains against the Greenback. USDIDR sits just under the late-March high at 14255 which acted as support during the early days of June. This has opened the door to continued cautious progress to the downside until we reach the next area of support around 14155. Otherwise, turning higher exposes the next area of resistance around 14340. 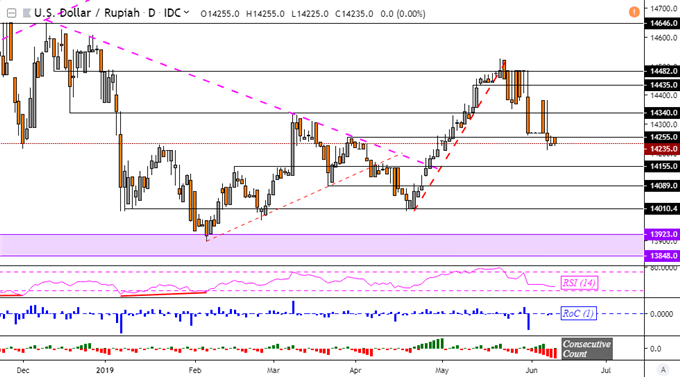