See our quarterly forecast to learn what will drive prices throughout Q2!

Over the past week, volatility across the rates market has surged as the Federal Reserve opened the door to a more accommodative stance, which in turn has seen an aggressive rise in Fed rate cut bets with 68bps worth of easing priced in by the year-end. Alongside this, the growing concerns over the US-China trade war has also fueled demand for US treasuries. However, despite the sizeable drop in US yields, the USD has held up relatively well in comparison with the surge in rate volatility (highest since 2016) failing to spill-over into FX markets as 1-month implied vols remain relatively muted. 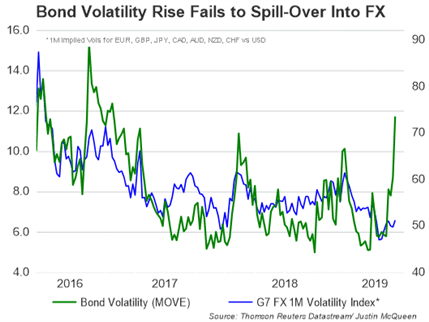 That said, given that equity market has also lagged the pick-up in bond volatility, this perhaps explains why currency volatility has been relatively muted, as such, focus would be on for a jump in the VIX before we see a spill-over into FX markets. In turn, it is useful to note which currencies are most impacted to a rise in the VIX. 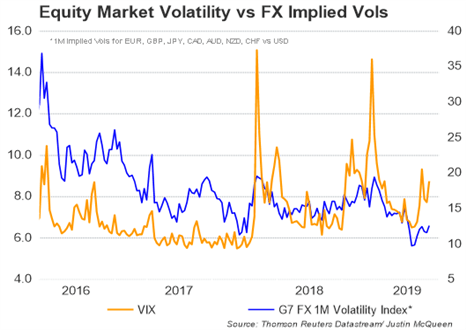 As shown by the graph below, when looking for a rise in the VIX to stir currency volatility, strategic plays are best seen through safe-havens such as the Japanese Yen and Swiss Franc against emerging markets (ZAR, KRW, TWD) and oil sensitive currencies (CAD, NOK, RUB). 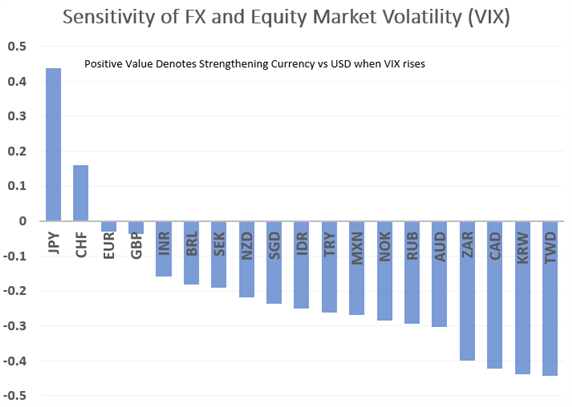