The Swedish Krona and Norwegian Krone will likely find themselves under pressure ahead of major volatility-inducing event risk this week. Some of these include the ECB rate decision which is expected to be followed by a downward revision of the outlook, critical data out of key Eurozone member states and the publication of US non-farm payrolls (NFPs) data.

Due to the unique nature of EU-Nordic relations, convulsions in the political and economic body of Europe is frequently reflected in Krona-Krone price action. This week, the ECB rate decision will be a major event risk to monitor because of the implications it has for monetary policy in one of the largest economies in the world. This comes against the backdrop of ongoing negotiations to replace the head of the ECB.

Other event risk which may trigger a violent reaction in Nordic FX include critical economic data include Germany factory orders, Eurozone GDP, Italian unemployment and much more. Relative to economists’ expectations, European economic data has been broadly underperforming relative to economists’ expectations, perhaps signaling that analysts were overly optimistic about the EU’s growth prospects.

Meanwhile, US-EU trade relations continue to be a point of concern and divergence in policy toward Iran may spark additional tension between Brussels and Washington. Diplomatic relations between the two superpowers remains shaky with officials in the US contemplating imposing sanctions against Europe unless it curbs its special trade program with Iran. Will foreign policy become entangled in trade negotiations? 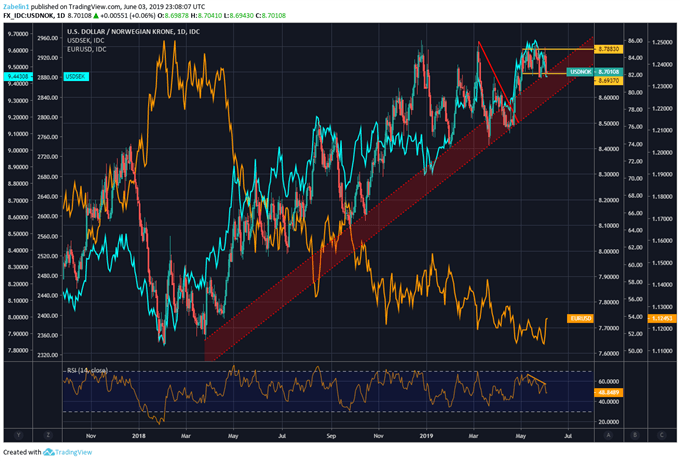 VOLATILITY AHEAD OF US NON-FARM PAYROLLS

In the US, non-farm payroll data will attract the attention of investors all over the world because of the impact it will have on Fed monetary policy. The volatility from this publication will likely be exacerbated by the release of May’s unemployment rate. Since February, US economic data has been tending to underperform relative to economists’ expectations with the most recent ISM data falling in line with this trend.

If prevailing economic trends continue to show weakness, it could clip the wings of hawks in the central bank. At the last FOMC meeting, Chairman Jerome Powell said that the temporary lull in inflation was “transitory” – implying that if price growth is satisfactory, it could give the Fed impetus to raise rates. If the aforementioned data shows weakness, it could cause officials to question the outlook for inflationary pressure.

Unexpectedly, Swedish and Norwegian PMI performed better-than-expected yesterday despite the souring outlook for global growth amid heightened geopolitical tensions and brewing trade war concerns. Local industrial data will be on the economic docket for both countries and will likely induce spikes in volatility, though likely to a lesser extent than other event risk that is headlining this week.

In Norway, Norges Bank Governor Øystein Olsen will be giving a speech on June 5 which may contain critical information on the outlook for monetary policy in light of growing uncertainty. While the Norges Bank has largely remained one of the more hawkish central banks in the developed world, its outlook may dramatically shift and may fall prey to the same ailments afflicting its peers.