Crude oil prices are dropping following the latest salvos in the US-China trade dispute and further losses now look possible unless there is a breakthrough. The US has already raised tariffs on Chinese goods and China has responded by pledging to increase tariffs on $60 billion of US goods.

US President Donald Trump reduced tensions late Monday, saying the trade talks are “going to be very successful” and he is still expected to meet Chinese President Xi Jinping at a G20 summit in Japan on June 28/29. However, the oil price is under downward pressure on concerns that demand for it will suffer if economic growth slows. 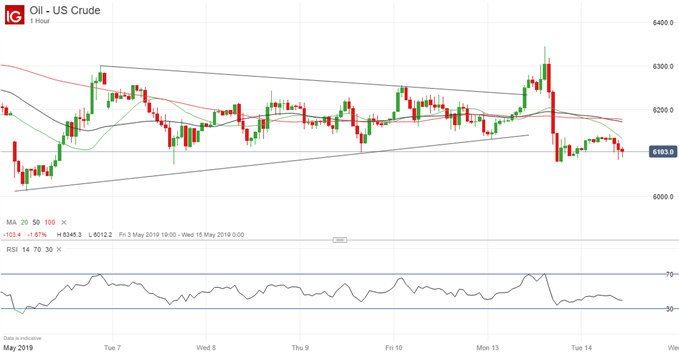 That is outweighing news that two Saudi oil tankers sustained “significant damage” in a “sabotage attack” off the United Arab Emirates on Sunday. The US has said that Iran may have been behind the attack, ramping up tensions between the two countries.

Meanwhile US sanctions on Iran and Venezuela are also reducing supplies, although US production will likely continue to rise.

How to trade oil: crude oil trading strategies and tips

Looking ahead, the next big event for oil markets could be a meeting of the Organization of the Petroleum Exporting Countries (OPEC) and its allies, including Russia, in Jeddah on May 19.