Forex market volatility has cratered to lows not seen in years. In fact, the Cboe Currency Volatility Index for the Euro, Yen, and British Pound have all plunged to their lowest levels on record since the financial instruments began trading in 2015. 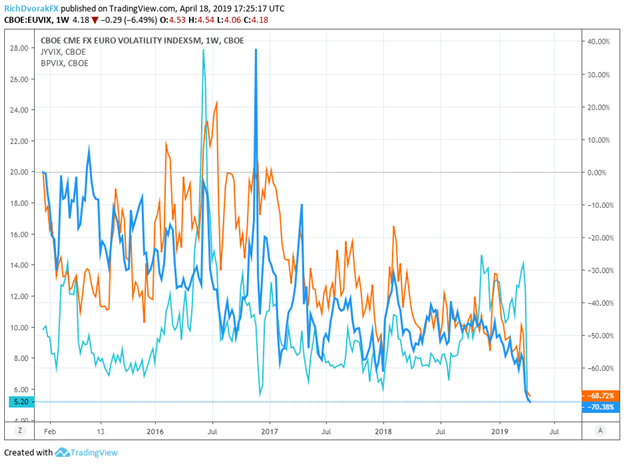 Although British Pound price action was on the rise as Brexit uncertainty sent the Sterling swinging in response to the latest headline, delaying the UK’s departure date to October 31 has sent GBPUSD implied volatility nose-diving.

Rebounding market optimism with the help of central bank dovishness subsequent to last year’s widespread selloff has similarly contributed to the collapse in volatility for the Euro and Yen. 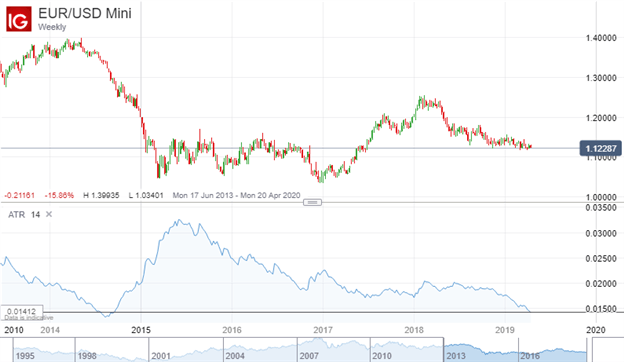 EURUSD’s average-true-range has dropped to a mere 14 pips which is the metric’s lowest reading since September 8, 2014. Although, the last time spot EURUSD price action was this muted, currency traders subsequently experienced a sharp return in volatility between August 2014 and June 2015. 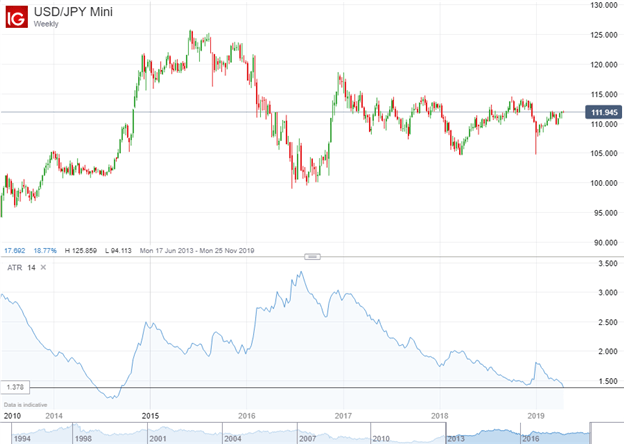 Likewise, the average-true-range for USDJPY has also collapsed to its lowest level since September 8, 2014. However, similar to the proverbial law of physics ‘what goes up must come down,’ volatility can only stay so low for so long before a catalyst emerges that sparks a significant market move.

The most recent occurrence of this was at the beginning of the year when Apple lowered its earnings guidance which sent a shockwave across APAC markets and ignited a currency flash-crash in the Japanese Yen.

Now with Brexit delayed for another 6 months, the US-China trade war supposedly coming to an end and rebounding global economic growth expectations, several of the market’s largest risks have dwindled. These developments have contributed to the overarching risk rally and has increased the relative attractiveness for currency carry trades due to dissipating uncertainty and related volatility.

That being said, these risks albeit less prevalent are still unresolved. If uncertainty regarding these issues flares up or factor jolts market sentiment and risk appetite, this could just be the ‘calm before the storm.’