What if Mexico and Canada Join the United States in the Trade War with China?

Progress in the US-China trade war has ground to a halt according to officials from both sides, which has rattled investor sentiment. As each party searches for leverage, some market participants have suggested a united USMCA could band together in an effort to alter uncompetitive Chinese trade practices. While Mexico and Canada carry significantly less sway with the Asian nation than the US, their trade balances are anything but negligible. 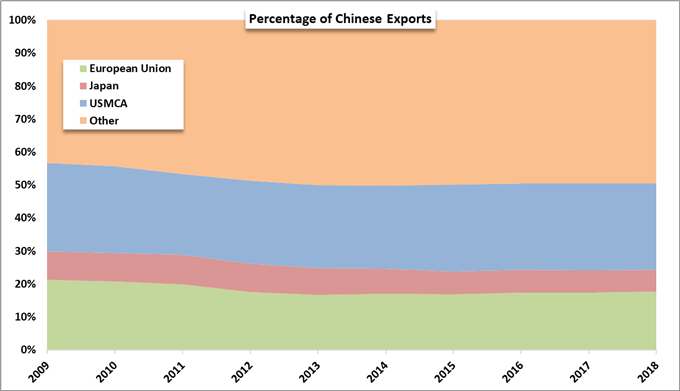 Over the last 10 years, Canada and Mexico have accounted, on average, for 2.43% and 2.96% of China’s total exports. During this time, Canada has seen its share of Chinese exports shrink – from 2.6% in 2009 to 2.3% in 2018. On the other hand, Mexico has seen its trade with China climb from 2.43% in 2009 to 3.36% in 2018, as the economic ties between the two countries grow. Together, the three North American nations account for more than 25% of China’s total exports. Conversely, the reliance of USMCA members on Chinese demand is quite limited. 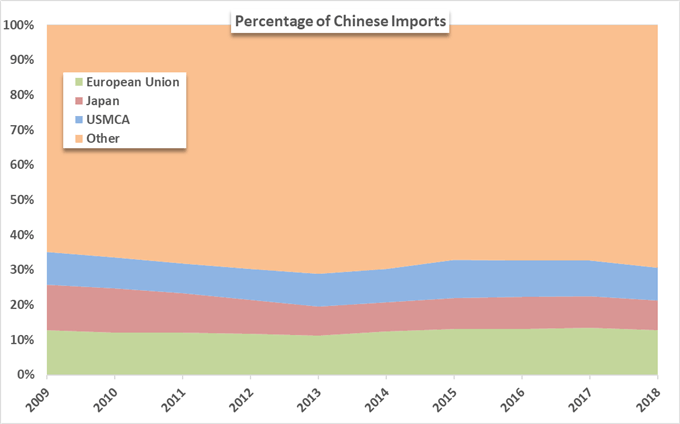 North American demand for Chinese goods has fluctuated over the last decade, reaching a low of 8.62% in 2011 and a high of 10.83% in 2015. More recently, demand has been trending lower and the total percentage of Chinese imports from USMCA nations slipped to 9.31% in 2018.

View A Brief History of Trade Wars for background on economic conflicts like the US-China Trade War.

Therefore, the trade relationship between USMCA and China leaves the latter with few retaliatory options. The nation has already had to explore unconventional methods in its economic bout with the United States, so an engagement with a trading bloc that accounts for 26% of trade inflows but only 9% of outflows could weigh significantly on Chinese trade and the economy by extension. But what are the chances the North American nations band together?

Currently, the chances are low. The USMCA agreement will first have to be passed by US lawmakers – which is anything but certain. This assumes the removal of metal tariffs was the final barrier for agreement from Mexico and Canada. Beyond that, the United States will have to convince its partners to engage in economic conflict with the world’s second largest economy – a tall task. However, there is some precedent for cooperation.

On December 1, Huawei CFO Meng Wanzhou was detained in Canada at the behest of the United States. The detention amounted to another front in the US-China trade war – and dragged Canada into the conflict. Since the detention in late 2018, tensions between Canada and China have been strained as two Canadian nationals faced arrest in China alongside a block on imports of canola seeds from two of Canada’s biggest exporters.

Early this May, President Trump and Canadian Prime Minister Justin Trudeau talked over the phone to discuss trade. The two reportedly discussed steel and aluminum tariffs, which have since been removed – paving the road to recovery between the two partners. With these developments, Canadian action against China now seems plausible, with multiple reasons for Canada to join forces with the US.

Mexico Has Everything to Gain

While Canada has an axe to grind, Mexico could look to make hay while the sun shines. As increased levies make Chinese exports less attractive to US consumers and less profitable for exporters, corporations will search for alternatives. Last week, Walmart announced it will begin analyzing options to shift its supply chain out of China to avoid price increases and others are likely to follow. While many companies will look to shift production elsewhere in Asia, some have chosen to move closer to home. 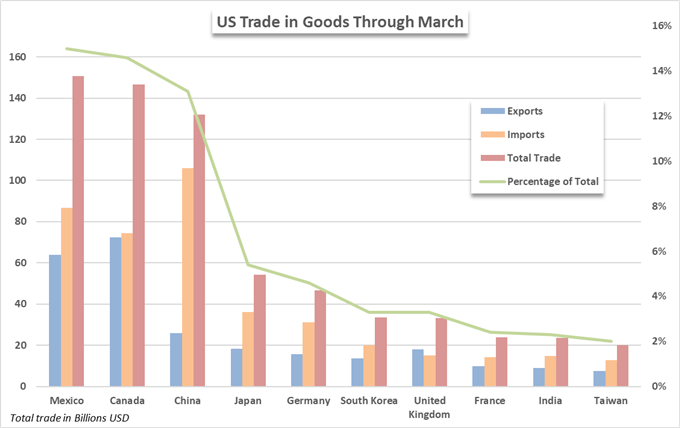 Already, companies have begun to open up shop in Mexico – with Hasbro and GoPro as two of the more notable examples. The shifting tides have had an immediate impact on recent trade data. Consequently, Mexico is now the United States’ top trading partner in goods according to US Census Bureau data. Further, US imports of Mexican goods rose 10% in 2018 – the most since 2011.

That said, the country’s best course of action may be to stay off the radar and hope the trend continues. In the year-to-date, USDMXN has slipped -3.3% and the Peso could etch greater gains should exports to the United States continue to climb.

While the likelihood that either Mexico or Canada directly engage in the trade war is minor, its impacts can be observed in shifting trade balances and fluctuating currency rates. But, with the Chinese economy hinged to exports, the addition of two import-heavy belligerents could prove an insurmountable obstacle for Xi Jinping and the People’s Bank of China – were it to occur.