Given that China imports significantly fewer products from the United States than the US does from China, the country is limited in what retaliation it can deliver via tariffs. Consequently, China’s decision to increase tariffs on the $60 billion in goods effectively exhausts that option. As the economic bout continues and each side vows retaliation, the conventional options at China’s disposal are limited. With that in mind, what role will USDCNH play in the conflict? 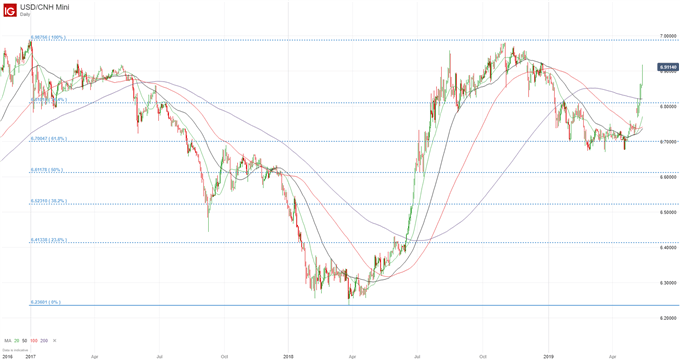 In the past, the People’s Bank of China has been unwilling to allow USDCNH appreciate beyond 7.00 – to prevent the risk of capital flight from the country. As the pair climbs amid the trade war, it is widely assumed the PBOC will step in once again to arrest depreciation beyond 7.00. To that end, the bank could look to increase intervention and buoy the Yuan further as a tool in the trade war, thereby reducing the purchasing power of US customers – although a stronger Yuan could reduce demand for Chinese products as alternatives become more attractive. That said, such a move is highly unlikely.

On the other hand, if the PBOC is unwilling – or unable – to stem losses in the Yuan, the consequences could be dire. A break above 7.00 without an official announcement from the country’s central bank would call the institution’s efficacy into question and capital could begin to flow elsewhere. Capital flight would exacerbate any weaknesses and exert considerable pressure on the Chinese economy which leaves 7.00 as a critical measure to watch in the trade war.

While a surge above 7.00 would be dire, there are no implications that the PBOC will allow such a move at this time, but as the trade war progresses and China looks to explore unconventional retaliation tactics, all options are on the table. Still, cooler heads may have the chance to prevail. US and Chinese officials have stated they continue to negotiate, and President Trump announced he will meet Chinese President Xi Jinping at the G20 Summit in June. In the meantime, global risk assets will continue to wrestle with the ramifications of higher tariffs.