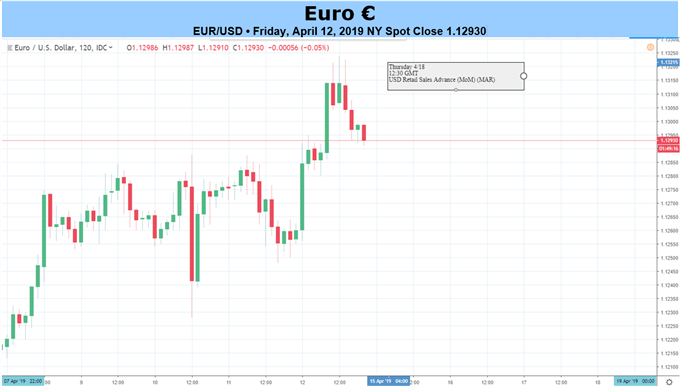 The DailyFX Q2EUR Forecast is available to download including our short- and medium-term look at the Euro.

Looking for a technical perspective on Euro ? Check out the Weekly EUR Technical Forecast.

The single-currency is gaining strength going into the weekend, aided in part by weakness in the US dollar, and will wait until data releases mid-week until it confirms whether this trend has further to go. The most important releases of the week are on Thursday with the first look at German and Euro-Zone PMIs. The recent data has been weak with German manufacturing in particular at a 2012 low as factory activity contracts further. A rebound of these levels may add support to the recent tick higher in the Euro although it is unlikely to fuel a further advance. This week’s ECB monetary policy meeting was rather muted affair and offered the market very little in the way of any fresh guidance or opinion. 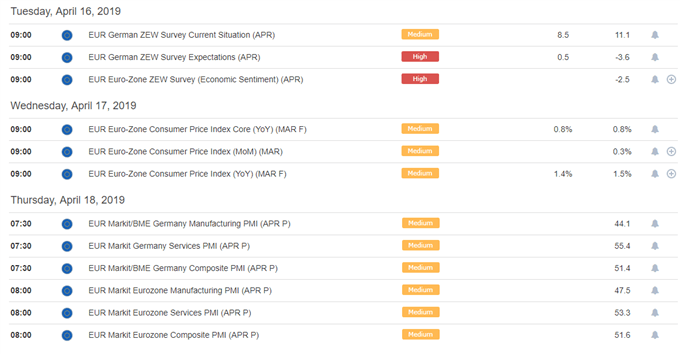 While the currency may be seeing gains, the outlook for the EZ economy remains weak. Recent ‘sources’ reports suggest that the ECB may be willing to offer the upcoming 2-year TLTROs with negative rates, while German 2019 GDP may well be downgraded again to 0.5% from a current level of 1%. Factor in that Italian GDP for this year is now expected to be around 0.2% and the problems for growth in the single-block remain entrenched. In addition, US-EU trade tensions re-emerged this week after US President Trump threatened an additional $11.2 billion of tariffs on EU goods as part of a dispute over EU subsidies to European airline giant Airbus. The EU said that they would look at imposing tariffs on US airline manufacturer Boeing in retaliation. A fresh trade dispute with the US, coming at a time when Brexit is far from settled, may well weigh further on economic growth in the Euro-Zone.

TLTROs – The ECB’s Other Stimulus Tool.

EURSUD has taken all these negatives in its stride this week and pushed back above 1.1300 and a close above this level may well put in a short-term floor for the pair. The week will also be affected by the Easter break which will curb positioning taking and crimp volatility.