Asia Pacific benchmark stock indexes aimed mostly higher towards the transition into European trading hours. Growing fears about a US recession took a breather after a closely-watched section of the yield curve inverted last week. The S&P 500 also dropped bearish reversal warnings, but those need confirmation.

Japan’s Nikkei 225 rose about two percent during afternoon trade as it sought to trim losses from Friday, but additional progress is needed. Australia’s ASX 200 and South Korea’s KOSPI had more restrained gains. China’s Shanghai Composite fared much worse, dropping as much as one percent.

Taking a look at the major currencies, the British Pound trimmed gains after UK’s Parliament seized control of the Brexit progress from Prime Minister Theresa May, initiating votes on alternative outcomes. The anti-risk Japanese Yen weakened across the board as the sentiment-linked Australian Dollar rose.

Looking ahead, S&P 500 futures are pointing little higher which indicates that the risk-on mood in markets may continue. This will then be tested later in the day when US consumer confidence data crosses the wires. Optimism seems to be picking up after the government shutdown ended, Brexit updates remain a wildcard.

Using futures to show afterhours trade, the Nikkei 225 is attempting to overturn the break under a well-defined rising support line from the beginning of this year. This places resistance at just under 21520. The index may struggle to push higher if the relatively-new falling resistance line from the beginning of March (blue line below) tames upside progress. Near-term support appears to be a range between 20680 – 20973. 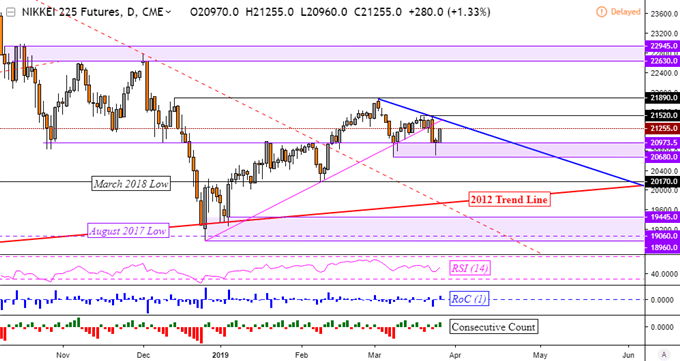