Asia equities traded mostly lower on Thursday, failing to find much upside follow-through after a somewhat rosy session on Wall Street. This may be due to the fragile fundamental picture for global growth, underlined by ECB President Mario Draghi and the FOMC meeting minutes over the past 24 hours.

China’s Shanghai Composite was the worst-performing regional index, declining over 1.3% heading into the close. Shares in Australia and South Korea fared better, but still lost ground. The former country’s benchmark ASX 200 dropped about 0.25% while the latter’s KOSPI shed a meager 0.1%.

With in-line Chinese CPI data behind us, the focus for stocks turns to the upcoming first quarter US earnings season. This is in the context of a slowing Europe and a fragile China. Data has also been tending to underperform in the world’s largest economy as of late, with the recent mixed US CPI report as an example.

Taking a look at currencies and commodities, the pro-risk Australian and New Zealand Dollars aimed narrowly lower. Crude oil prices weakened alongside the deterioration in sentiment, pressuring the Canadian Dollar as well.

What is also concerning is that bearish technical signals have recently sprung up in a couple of major benchmark indexes. Both the S&P 500 and the DAX 30 are being menaced by bearish Evening Star candlestick formations. Now, there is a reversal warning sign in another below.

UK’s FTSE 100 just closed under a near-term rising support line from the end of March. With confirmation, we may be due for another retest of the long-term upward-sloping trend line from the end of 2018 that is guiding the index higher. Meanwhile, immediate resistance appears to be at 7461. 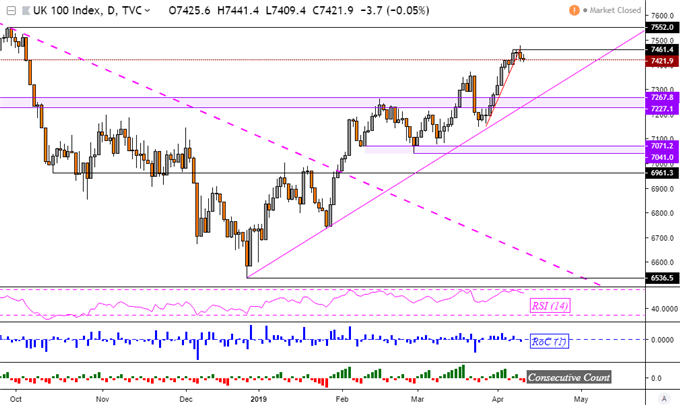