Though the rally is large, Crude Oil’s longer-term wave is still lower

Our previous longer-term Elliott wave forecast for crude oil from October 3 suggested a meaningful top may form near 77.31 or possibly 80. We later know that a high was formed that day at 76.88 in route to a 35% decline.

The subsequent decline to end 2018 was sharp and abrupt making it an Elliott wave impulse pattern. We were a little premature in looking at the bottom of the impulse pattern on December 4. That wave ended up being the fourth wave of the bearish impulse leaving one more dip to finalize the wave. This impulse pattern completed on December 24 and crude oil has rallied nearly 33% since. 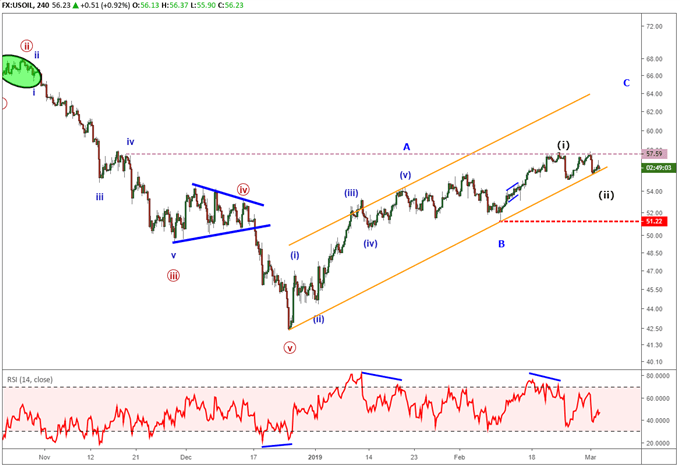 what is the current Elliott wave for crude oil?

We recently wrote about 8 scenarios that tend to occur after an Elliott wave impulse pattern ends. Due to the positioning of the impulse wave and shape of the subsequent rally, the higher probability move is that crude oil is advancing in a zigzag pattern (scenarios 1,4 or 6). Crude oil appears locked into the ‘C’ wave of the zigzag pattern. Once the five waves of the ‘C’ wave are in place, we will look for another major high to form.

The February 22 high does complete five waves on a smaller scale so it is possible the corrective bounce is over. However, the length of ‘C’ relative to ‘A’ in the zigzag doesn’t fit the guidelines well. Therefore, we will consider the February 22nd high as wave (i) of ‘C’. Crude oil has traded sideways since so we are counting that range as wave (ii) of ‘C’. A break above $58 will build evidence of a rally in wave (iii) of ‘C’. Otherwise, a dip below the orange trend line suggests the mood of the market is changing and increases the probability a near term top is in place for crude oil.